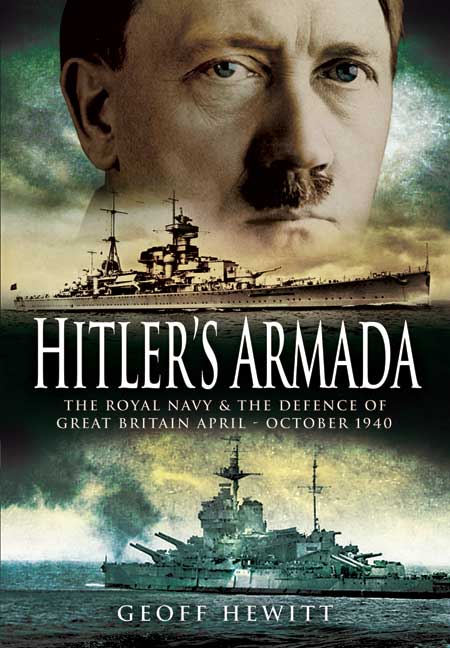 The Royal Navy & the defence of Great Britain April- October 1940

Add to Basket
Add to Wishlist
You'll be £19.99 closer to your next £10.00 credit when you purchase Hitler's Armada. What's this?
+£4.50 UK Delivery or free UK delivery if order is over £35
(click here for international delivery rates)

Hitler's Armada examines the aborted German invasion of 1940 in a fresh and original manner by looking past the myths and legends which have subsequently surrounded it, in order to arrive at significant new conclusions by referring back to the actual events. The book presents fascinating detail of Hitler's Operation SEALION and, by study of its weaknesses, demonstrates that control of the sea, not the air, was the critical factor. It also questions whether the traditional British view of the importance of the Battle of Britain as the key factor in the prevention of invasion is really tenable. The importance of the Royal Navy during this period, generally overlooked, is brought into sharp focus and, possibly for the first time, the actual dispositions of the Royal Navy anti-invasion forces are presented in detail. The author examines the relative strengths of the two sides drawing interesting conclusions about the inadequacies of the German resources particularly and their reliance on mine laying.The author discusses the conflict between air and sea power in the months leading up to the summer of 1940, concluding that, at this stage of the Second World war, air power was far from supreme. The findings of the author may be controversial, but the process by which they are reached strongly supports their validity.

Hitler's Armada is a thought provoking and controversial book...a satisfying read and a cogently argued piece of military history. I recommend it.