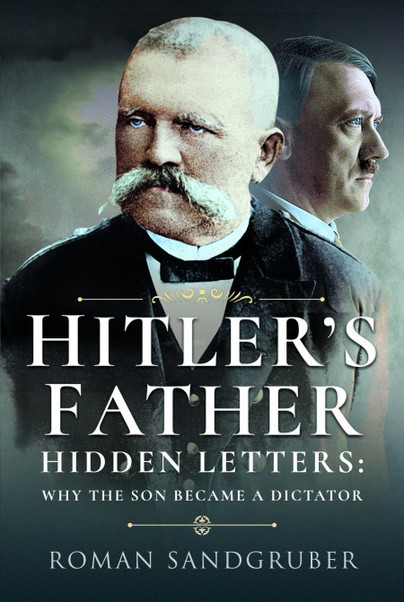 Hidden Letters – Why the Son Became a Dictator

Preorder
Add to Wishlist
You'll be £20.00 closer to your next £10.00 credit when you purchase Hitler's Father. What's this?
+£4.50 UK Delivery or free UK delivery if order is over £35
(click here for international delivery rates)

The bundle of 31 letters, the pages of which had long yellowed with age, had lain hidden in the attic where they were found for over a century. Only when the razor-sharp script was examined further did historians discover just who had written them – and that person, Alois, was Adolf Hitler’s father.

Born Alois Schicklgruber on 7 June 1837, the identity of his biological father still undisclosed, Alois eventually became a civil servant in the Austrian customs service. At around the age of 40, Alois changed his family name from Schicklgruber to Hitler – his infamous son being born some eleven years later.

The contents of the re-discovered letters have allowed the renowned historian and author Roman Sandgruber to reassess the image that we have of Alois, offering the world a completely new and authentic impression of the man. In Hitler’s Father, Sandgruber re-examines Alois’ personality and how he significantly shaped the young Adolf.

The letters also shed further light onto the everyday life of the Hitler family as whole, a story which is often characterized by myths, inventions and assumptions. They have given the author the opportunity to recount the childhood and youth of the future dictator, painting a dramatic picture of the ‘Führer’ growing up.

These letters also help answer the question that is so often asked: How could a child from an Upper Austrian province, seemingly a failure and self-taught, rise to a position of such power? Indeed, Adolf Hitler’s father and ‘the province’ seemingly lay heavily on him until his suicide in the Führerbunker in 1945. The author examines how the young Hitler’s lowly upbringing may have affected him in the years that followed – years which shaped the history of the whole world.

ROMAN SANDGRUBER is an Austrian historian and author who was born in Rohrbach in 1947. He studied history, German studies and economics at the University of Vienna from 1965 to 1971. From 1988, Sandgruber was a full professor at the Faculty of Social and Economic Sciences at Johannes Kepler University. He was also a member of the Austrian Academy of Sciences and was chairman of the senate of the University of Linz from 1996 to 1998, as well as a member of the Austrian Commission of Historians from 1998 to 2003.