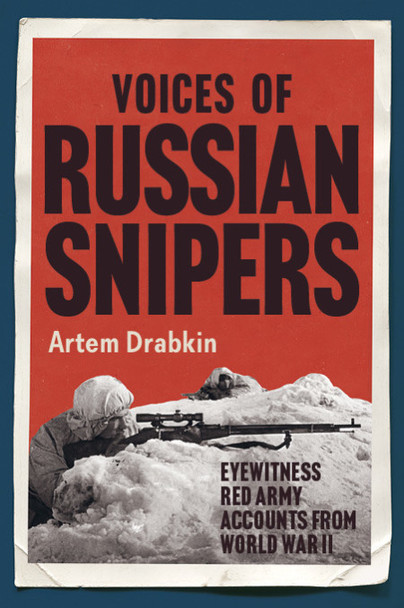 Preorder
Add to Wishlist
You'll be £17.50 closer to your next £10.00 credit when you purchase Voices of Russian Snipers. What's this?
+£4.50 UK Delivery or free UK delivery if order is over £35
(click here for international delivery rates)

‘Wiped out three Nazis in a shallow trench. But only got out by a miracle. The Germans apparently guessed where my lair was and unleashed a hurricane of mortar fire … the company had as good as buried me. Somebody saw a direct mortar hit on my lair.’ - Fyodor Dyachenko

‘The German snipers on the other side also engaged in stalking, especially stalking us women. They had no female snipers, just men’ - Antonina Kotlyarova

‘Dreadful death cries could be heard from the German trenches, where the enemy were bayonetting those of our wounded who had remained behind there’ - Klavdia Kalugina

‘Before firing I managed to get a good look at him through my sights. He was a young officer. He seemed to be looking straight at me and I shot him. But it was a human being! Then my feelings dulled and I went on killing the way we were supposed to’ - Antonina Kotlyarova

‘I lay down on the ground, pressed my cheek close to the stock, took aim at the target and remembered the lieutenant’s words: “Make sure your heart is behind every bullet… Believe in your shot” - Pyotr Belyakov

‘When we learnt on May 9th that the war was over, our joy knew no bounds […] I felt enormous relief when I heard the news of victory – now I wouldn’t need to kill anymore’ - Maria Bondarenko

With a wealth of first-hand testimonies, collected by Artem Drabkin, this is a unique collection of eyewitness accounts from the Second World War. The reminiscences of the Red Army snipers reveal fascinating details of life in Russia before the war, as well as the surprising commonality of the privation and unforgiving experience of frontline combat and the day-to-day starkness of sharpshooting.