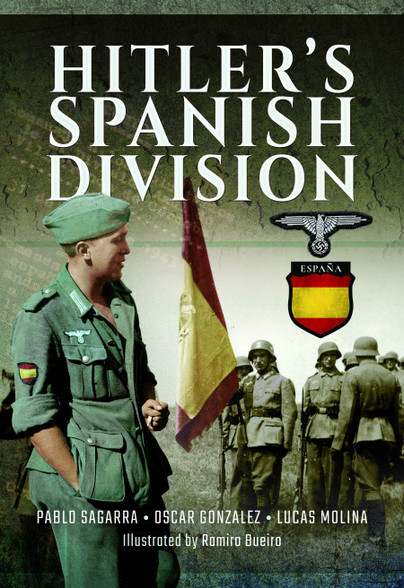 Add to Basket
Add to Wishlist
You'll be £13.99 closer to your next £10.00 credit when you purchase Hitler's Spanish Division. What's this?
+£4.50 UK Delivery or free UK delivery if order is over £35
(click here for international delivery rates)

"This is a beautifully illustrated book of 115 pages. It is chock-full of period photographs of individuals, group shots, equipment, documents, medals and decorations...a nice addition to the library of any World War II buff."

A long-awaited and superbly documented work.

A very well researched book providing the answer for Spain's assistance to Germany in WWII.

This is a book above all for readers who are into militaria and scale models. But readers more interested in studying volunteer movements, especially Falangist/Fascist volunteers, are at the same time provided with an overview of the Spanish presence on the Eastern Front, plus a rather good glimpse into how much Eastern Front veterans affected the postwar Spanish Armed Forces.

Spanish Republicans and the Second World War tells the stories of the 500,000 Spanish Republicans that fled across the Pyrenees in 1939 as Catalonia fell to Franco’s victorious army in the final weeks of the Civil War. Many of the exiles played an active part in the Second World War. Some joined the French and British armed forces and saw action in various theatres including Africa and Europe (both in 1940 and after D-Day). In August 1944, Spanish Republicans in the La Nueve Company of General Leclerc’s Deuxième Blindée were the first Allied troops into Paris during the liberation of the…

Click here to buy both titles for £31.49
More titles by Oscar Gonzalez
eBook