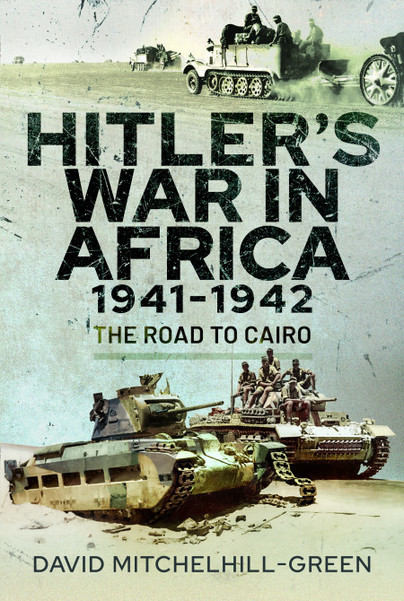 I found this a very interesting volume and I am pleased that I have had the opportunity to read it. The Africa campaign is of interest to me, and this book is highly suited to that interest. It can be said with great confidence that anyone who is also interested in this campaign will find this volume of enormous interest and that they should obtain a copy of this wonderful tome.

This a very good book which has much to recommend it.

The author provides an engaging narrative of the German involvement in North Africa and the motivations of Mussolini and Hitler. An occasion where Hitler again had to prop up Mussolini and attempt to sort out the mess the Italians had made – Very Highly Recommended

This book is both informative and gripping, a jolly good read, which we highly recommend and hope that a further book, Alamein to the end, is on the way.

What an engaging and well-written book that tells the story of the allies’ battle against Germany during the North African campaign from 41 – 42. The writing was good and had me gripped in good parts of the book. What struck me about the book was the balance told from either side of the warring armies and it gives good personal accounts of how it affected people from either side. It also showed how unorganised things were and how the powers that be could have done a better job. Other things that commend the book well are the decent pictures, good maps and diagrams and an excellent bibliography at the end of the book. If anything, Pen & Sword always do these little things very well.

This book is a rarity among WWII books.... the first thing I noticed was that it has maps! So many modern history books have overlooked this aspect and I have always found it frustrating having to check locations to understand the course of a book. Apart from the excellent maps, the book's text is equally clear so the reader can follow this complex campaign; his clarity reflects the amount of research undertaken by the author.

When reading about the many German campaigns of WWII I frequently ponder how and why so many high ranking German commanders followed Hitler's insane orders and the war in North Africa is no exception. The Germans put up a ferocious fight but were doomed to failure from the outset, and fighting alongside the Italian army didn't help their cause. Having accepted the Germans had little choice but to follow Hitler's orders, Field marshal Rommel achieved a great deal by engaging the British under Montomery before being overwhelmed. Meanwhile, the author reviews many first hand accounts which illustrate the savagery of war; the accounts of the fate of many soldiers are truly sad. This is all reflected by the statistics; the British Eighth Army lost 2,350 men killed, nearly 9,000 were wounded with 2,260 reported missing. The Germans lost 1,149 killed, 3,886 wounded with a similar number captured. Italian losses were 971 killed, 933 wounded with 15,550 captured. Yet, as in any campaign, there are accounts of great bravery.

The account is well written and, although necessarily detailed, it is an excellent read.