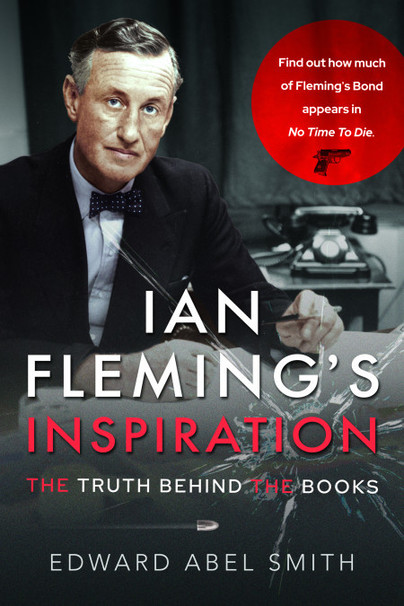 You'll be £10.49 closer to your next £10.00 credit when you purchase Ian Fleming's Inspiration. What's this?
+£4.50 UK Delivery or free UK delivery if order is over £30
(click here for international delivery rates)

Ian Fleming might have died prematurely aged 56, but so much of him lives on to this day through the most famous spy in the world, James Bond.

Anyone fascinated by spies and spying will be captivated by this look at the life and experiences of the creator of the most famous spy in popular literature - James Bond. Superb.

This book is well researched and well written and held my attention from beginning to end.

As a lifelong James Bond fan, I particularly enjoyed the way that the author shows the comparisons between Ian Fleming’s own life and his books. It was almost as if the creator of this ‘super spy’ wanted to take his own amazing, decadent, life up a notch.

There are chapters listing each book and the real-life events which shaped each story. In ‘On Her Majesty’s Secret Service’, which, to me, was the only Bond Book with a sad ending, we learn that the death of a close lady friend shaped the ending of the book. In Fleming’s own life, Edward Abel Smith shows we have the bases for not only James Bond, but that M and Q were based on war time colleagues.

Fleming was hard drinking, a lover of many women, brave, intelligent, influential and, possibly, narcistic too; just like his character, James Bond. In reality, plenty of wit and charm but probably a not very likeable person, whereas, in his alter ego, Bond, we let the character get away with those flaws.

An excellent book on an amazing person.

I’m not particularly a James Bond fan, and certainly enjoy the books more than the films, but this fascinating exploration about Ian Fleming’s life and how it relates to the fictional character he created I found both absorbing and enlightening. If some of Bond’s exploits seem far-fetched then this book shows how real-life can also sometimes seem far-fetched. It’s an insightful biography, demonstrating how Fleming drew on his own experiences for his books and one that will appeal both to the die-hard Bond fan, who will find much to interest them here, as well as to the general reader. A really good read.

Ian Fleming’s Inspiration: The Truth Behind The Books is a biography and shows us how much of Fleming’s real life experiences influenced and can be found in his creation of the James Bond stories.

Written in easy-to-read chapters which show the connections between either a novel or short story written by Fleming, Edward Smith has formulated an interesting look at one of Britain’s most famous fictional spies.

I was fascinated by Fleming’s career through journalism, then in a role as assistant to the Head of Naval Intelligence during the war. Here he gained much of his inspiration for the spy elements of his books. After the war, Fleming bought a property in Jamaica, and his love for this country shone through in his books, with several of them featuring Jamaican settings.

I also discovered that Fleming wrote Chitty-Chitty-Bang-Bang. Thinking back to the film version of this book, I can now recognise some of Fleming’s themes such as gadgets and inventions, plus the darker side of war and spying, and of course a beautiful leading lady.

With the legacy that is James Bond living on, even after the author’s death, this book would make an ideal gift for Bond fans.

All in all, it's quite a page turner considering that's a non-fiction work – this is partly down to the subject, but it's also a product of the ingenious way the author tells the tale.