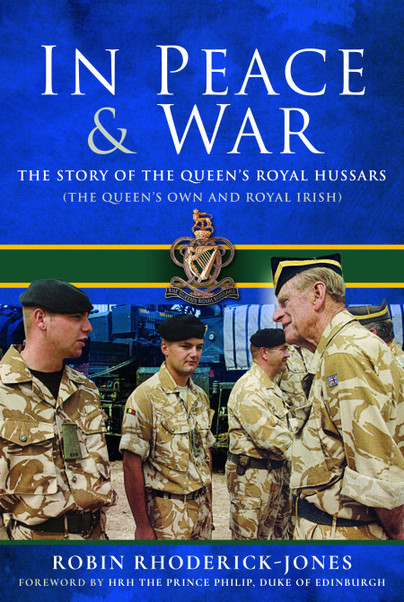 In Peace and War (Hardback)

Add to Basket
Add to Wishlist
You'll be £18.00 closer to your next £10.00 credit when you purchase In Peace and War. What's this?
+£4.50 UK Delivery or free UK delivery if order is over £35
(click here for international delivery rates)

Order within the next 39 minutes to get your order processed the next working day!

The Author tells the history of these celebrated regiments who fought alongside each other at Dettingen, Balaklava, the Peninsula, in India and during the two World Wars.

Recently the QRH have seen action in Bosnia-Herzegovina, Kosovo, Iraq and Afghanistan where the Regiment provided the first cavalry-led ground-holding battlegroup. Currently stationed in Athlone Barracks, Sennelager, the QRH is the only cavalry regiment equipped with the Challenger tank, which they expect to retain on return to the UK in 2019.

In Peace and War is a superbly researched record of over 300 years’ distinguished service to the Crown. While the demands facing officers and men today may have changed over the years, what remains constant are the dedication, bravery, commitment and sense of humour of those who serve.

The book comprises of 300 pages, with 40 plates, and 26 maps and is hardback and of high quality paper. I have not tried to quote from the book as it is so comprehensive, and each chapter covers such a large swathe of history. 335 years is a long period to cover and the author does so very well. In many ways it is several books, as each century is such a massive sea change in military equipment, training and personnel.

A good long and comprehensive read for any one interested in the History of the country and its Armed Forces.

Robin's history of the Queen's Royal Hussars is a fitting tribute to the bravery and dedication of these men to the Crown and to Britain itself.

"In Peace & War is highly recommended."

This offering from Robin Rhoderick-Jones is well written and interspersed with pictures of various qualities.

Robin Rhoderick-Jones joined the Queen’s Royal Irish Hussars in 1962 and soon saw active service in the Borneo campaign. In 1967 he flew army helicopters for The Queen’s Own Hussars in Aden during its last six months as a British colony. He commanded the Irish Hussars from 1979 to 1981 during which he led a multi-national component of the Commonwealth Monitoring Force which supervised Rhodesia’s first full elections which led to the creation of Zimbabwe.

Since retiring from the army In 1988 he has published seven books, mainly biographies, as well as writing a one-thousand year dynastic history of the Grosvenor family commissioned privately by the 6th Duke of Westminster. In Peace and War is his first regimental history.