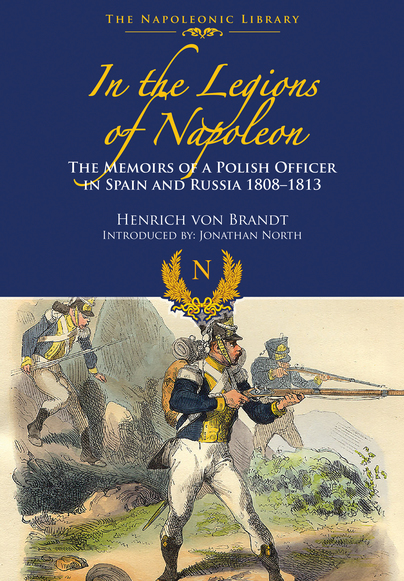 In the Legions of Napoleon (Hardback)

Add to Basket
Add to Wishlist
You'll be £19.99 closer to your next £10.00 credit when you purchase In the Legions of Napoleon. What's this?
+£4.50 UK Delivery or free UK delivery if order is over £35
(click here for international delivery rates)

In the Legions of Napoleon recounts the adventures of an intrepid Polish soldier who fought for Napoleon the length and breadth of Europe. By the time he was twenty-five, Heinrich von Brandt had marched from Madrid to Moscow and had been severely wounded on three separate occasions.

From 1808 to 1812 he was caught up in Napoleons attempt to subjugate Spain, fighting in battles, sieges including the siege of Saragossa and hunting and being hunted by merciless bands of guerrillas. In 1812 his unit took part in the crossing of the Niemen and the epic retreat from Moscow.

In his extraordinary memoirs Brandt describes in great detail the actions in which he fought, the type of officers and men he served with, and the grueling campaigns in which they participated. He also gives fascinating insight into the minds of his comrades and superiors. This book is a must for every Napoleonic historian, enthusiast, and anyone who likes a good story of high adventure.


This gem of a book is one of the best accounts of the Spanish war, as well as the desperation and heartbreak that was Russia.
Kevin F. Kiley


A fascinating, fast-paced and easy-to-read memoir full of insights regarding the true experience of a soldier and junior officer in the Napoleonic Wars. Brandt took part in the second siege of Saragossa, counter-guerrilla war, advance into Moscow, Battle of Borodino, occupation of Moscow and, of course, the retreat. HIs humour, perceptive observations and personal recollections of significant actions cannot help but to affect the reader.

The writer manages to vividly convey what it was like to take part in two hard fought campaigns, not for glory, but for survival.