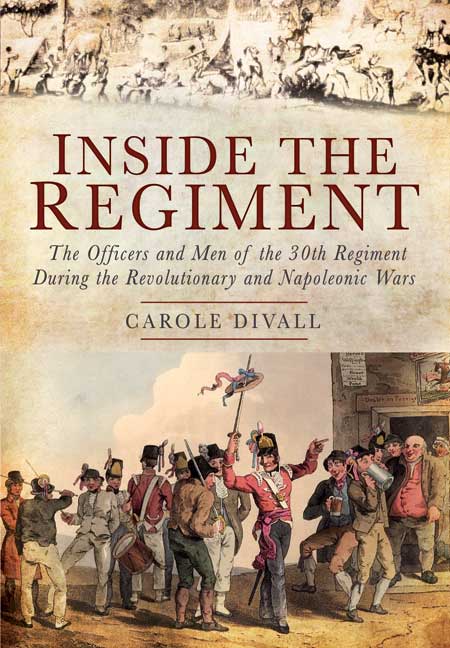 Inside the Regiment (ePub)

Click here for help on how to download our eBooks
Add to Basket
Add to Wishlist
You'll be £4.99 closer to your next £10.00 credit when you purchase Inside the Regiment. What's this?
Need a currency converter? Check XE.com for live rates

In this companion volume to her pioneering study Redcoats Against Napoleon, Carole Divall tells the fascinating inside story of a typical infantry regiment during the Revolutionary and Napoleonic wars. Rather than focusing on the history of the 30th Regiment of the Line in action and on campaign, she explores its organization, traditions and hierarchy, its personnel, and the ethos that held it together. Using primary source material, in particular surviving regimental records, War Office documents, letters and journals, she reconstructs the life of the 30th Foot – and the lives of the men who served in it – during a critical period in Europe’s military history.

This is my favorite book so far this year.

THis book makes both an excellent read and gives a real insight into the army during the period from 1793 to 1815 as seen through a study of two battalions of the 30th Foot - later to become the East Lancashire Regiment.

Once again Ms. Divall has written a highly readable regimental history that will hold the attention of both the casual reader and the dedicated scholar. I strongly recommend this book for anyone with an interest in the British Army, the Peninsular War, or a soldier’s life in India during the early 19th Century.


When I first saw the book, I was a bit puzzled. I had thought the author had covered the 30th Foot quite extensively in Redcoats against Napoleon and was not sure what the new book could contain. I was pleasantly surprised when I discovered that it focused not on the battles and campaigns of the regiment, but its internal operations from 1790 to 1829, when the regiment departed from India.

So just who were this assorted collection of men and officers who made up the backbone of the army, and how did they become an integral part of what was arguably the finest military machine Britain has ever produced?

Carole Divall, an expert on the history of the British Army during the Napoleonic wars, has all the answers and more in a fascinating new book which gives us the inside story of a typical infantry regiment 200 years ago.

‘Inside the Regiment is a superbly entertaining and revealing exploration of its organisation and traditions, its rigid hierarchy, the ethos that held it together and, of course, the soldiers who fought and died under its colours.’

‘Divall’s lively and colourful history covers every aspect of the regiment’s structure as well as providing a valuable window onto life in early 19th century Britain.
A superbly told and well-researched story...’