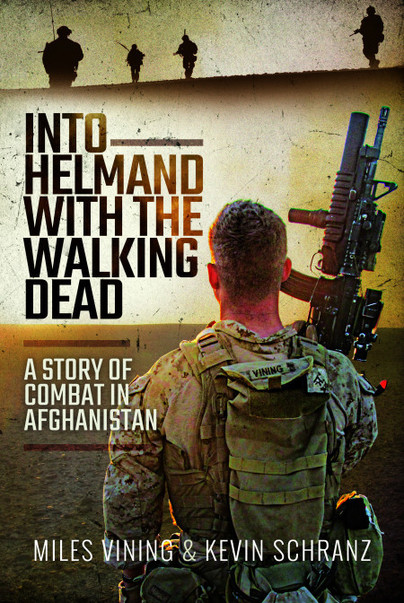 Into Helmand with the Walking Dead (Paperback)

A Story of Marine Corps Combat in Afghanistan

Add to Basket
Add to Wishlist
You'll be £14.99 closer to your next £10.00 credit when you purchase Into Helmand with the Walking Dead. What's this?
+£4.50 UK Delivery or free UK delivery if order is over £35
(click here for international delivery rates)

Order within the next 6 hours, 7 minutes to get your order processed the next working day!

The Marines of First Battalion, Ninth Marines earned their macabre moniker 'The Walking Dead' in the Vietnam War. Into Helmand with the Walking Dead follows the experiences of two Marine infantrymen from 1/9 fighting in Afghanistan.

Following the 11 September attacks in 2001, Operation Enduring Freedom catalysed the longest war in United States history. The lives of thousands of Afghans, Americans, and many others were forever altered due to the ensuing war. The book is a brutally honest portrayal of life and death in the Marine infantry both at war in Afghanistan and upon returning to the home front, where issues of reintegration and suicide become a reality.

This is the tale of the young Americans who became infantrymen and conducted America’s foreign policy in its most ruthless and straight-forward manner. But war, in and of itself, is only playing a small part. The culture and environment from which they re-entered civil society would leave them uncertain, and confused as to the cataclysm they had just left. This book is a testimony to their experience and the legacy of war on their generation.

As a soldier’s story, however, Vining’s memoir often crosses over into social history, offering valuable insights into the ordinary infantryman’s life at war and at home. The underlying societal message shouldn’t be lost either; too many of these men commit suicide, while others feel alienated. Vining brings that out well in his remembrance of Kevin Schranz, who receives co-author status, set alongside his own post-war battles. In the end, this is a sobering book and well worth reading.

Click here to watch the video book review via

Author interview with Miles Vining and extract feature included in

When he was out on patrol I could almost feel the weight he was carrying with extra load of the Electronic Disruption anti EID device he had to lug around. His fears and worries in action that he might might let the side down and cause an injury to one of his comrades. This tale covers two tours. I am totally immersed in this story and couldn't wait to spread the good news. Get it in your Christmas stocking if you can, the hardback is very reasonably priced and I bet you'll read it over and over again.

A compelling and gripping story of combat in Hellmand. Recommended as a very good read indeed.

Kevin Schranz enlisted in the Marines in 2010 as a Machine Gunner, deploying with First Battalion, Ninth Marines to Helmand Province, Afghanistan. After marrying and leaving the Marines in 2014 and started school first in New Hampshire, then at Ohio State University where he majored in International Studies. On September 28th, 2015, Kevin Schranz took his own life.

Miles Vining enlisted in the Marines in 2010 as a Rifleman, being assigned to First Battalion, Ninth Marines in Camp Lejeune, NC. There he deployed with the battalion to Helmand Province, Afghanistan. Upon being discharged, he entered into Indiana University Bloomington. Currently he volunteers with a humanitarian group in Southeast Asia in addition to researching historical and contemporary small arms from the Middle East and Central Asia for Silah Report.