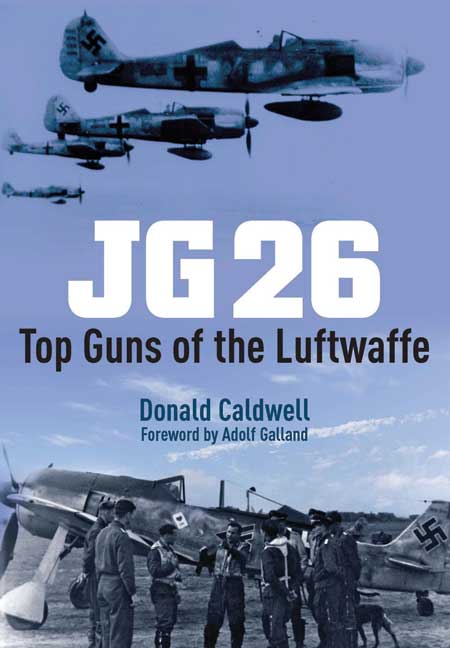 Top Guns of the Luftwaffe

Click here for help on how to download our eBooks
Add to Basket
Add to Wishlist
You'll be £4.99 closer to your next £10.00 credit when you purchase JG 26. What's this?
Need a currency converter? Check XE.com for live rates

Jagdgeschwader 26, the German elite fighter unit, was more feared by the Allies than any other Luftwaffe group. Based on extensive archival research in Europe, personal combat diaries and interviews with more than 50 surviving pilots, Caldwell has assembled a superb day-to-day chronicle of JG 26 operations, from its first air victory in 1939 to its final combat patrol in 1945.

A microcosm of World War II exists in the rise and fall of this famous fighter wing. For the first two years of the war it was an even match between the Spitfires and Hurricanes of the Royal Air Force and the Luftwaffe's Messerschmitts and Focke Wulfs; but the scales tipped in favour of the Allies in 1943 with the arrival of the Eighth US Air Force and its peerless P-51 Mustang.

The book has been endorsed by the top fighter commanders of three air forces: the RAF (Johnnie Johnson), the USAAF (Hub Zemke), and the Luftwaffe (Adolf Galland) and is considered essential reading for anyone interested in the aerial war of 1941–45.

Jagdgeschwader 26 was probably the most famous of the Luftwaffe's fighter units. This is a useful account giving the view from the other side.