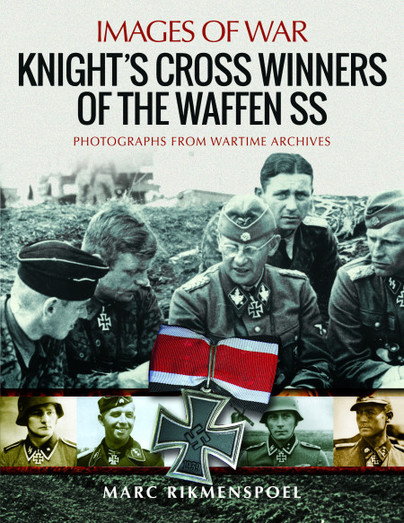 Add to Basket
Add to Wishlist
You'll be £14.99 closer to your next £10.00 credit when you purchase Knight's Cross Winners of the Waffen SS. What's this?
+£4.50 UK Delivery or free UK delivery if order is over £35
(click here for international delivery rates)

Knight's Cross winners of the Waffen-SS details some of the most-decorated personalities of that infamous organization. Rare photos will portray men such Sepp Dietrich, Theodor Eicke, and Michael Wittmann. The images are a mix of studio portraits and shots taken in the field.

... a good snapshot look at the winners of the highest German award.

Another great book in the "Images of War" series.

Of all Nazi Germany’s awards, the Knight’s Cross of the Iron Cross must be the most iconic for outstanding bravery and leadership in the field. This wonderful book charts those awarded to the Waffen SS and it is a very enjoyable book to read. It is sad to think about what the awardees experienced but their personal bravery has been acknowledged. The author has done a splendid job in helping to preserve their memory and he has done them a great service. Sadly, all these brave men have now died so all we have left for their gallantry are these photos, memories, and their Knight’s Crosses.

This was a fascinating read and something different to usual in the Images of War series, I really enjoyed this book as it was good to see from the opposite viewpoint of the German soldiers being congratulated. I’m sure there is probably an allied version of this book which would make a splendid read indeed. Despite the notorious reputation of the Waffen SS, it was nice to see at heart some could perform acts of heroism. This book is excellent with fantastic photos and information, a well done to the author for this book and his research. I would highly recommend this book.

Marc is the author of several highly acclaimed books on the Waffen SS and is a leading authority on the organization. His books include Waffen SS Encyclopaedia, Sunwheels and Siegrunen, and Soldiers of the Waffen SS: Many Nations, One Motto.