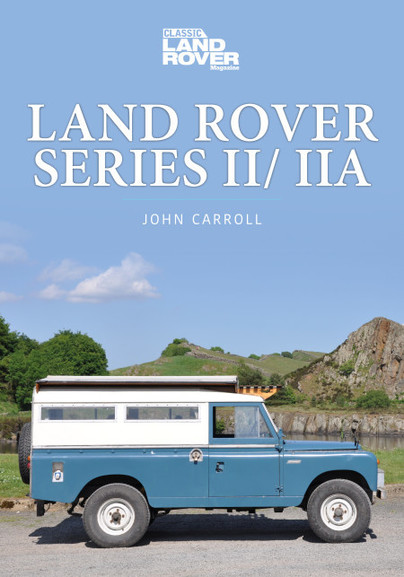 Add to Basket
Add to Wishlist
You'll be £12.79 closer to your next £10.00 credit when you purchase Land Rover Series II/IIA. What's this?
+£4.50 UK Delivery or free UK delivery if order is over £35
(click here for international delivery rates)

After ten years of production, the Solihull-manufactured Land Rover was established as a useful 4x4, popular with farmers, armies and those whose employment took them far from the beaten track. Following a redesign, the Series II Land Rover was launched in April 1958. It was available in two wheelbases, with a choice of diesel or petrol engines and a variety of body styles including pick-ups and soft-tops and, aimed more at travel and people-carrying rather than agricultural work, short and long wheelbase Station Wagons. The main difference that identified the new Land Rovers at a glance was the radius pressed into the aluminium bodywork below the galvanised waist rail. This changed the Land Rover's appearance considerably and was a shape that endured until 2016 in the Land Rover Defender. The Series IIA was introduced in 1961 and through a production run that last until 1971, a succession of upgrades, mainly detail and cosmetic changes, followed.

Land Rover production and sales peaked at the end of the sixties when more than 55,000 Land Rovers were sold in one year. This figure partially accounts for the popularity of the Series II/IIA Land Rovers but it is generally accepted that these were sme of the strongest Land Rovers ever built - the transmission was particularly noted - and it was these that formed the basis for specialist applications such as fire tenders, mobile cinemas, military models, ambulances, campers and those used to drive winches, pumps and agricultural machinery. Further specialisation came in the form of the Series IIA and IIB Forward Control and 'bonneted' One Ton models. All models of Land Rover were based on a steel, box-section chassis with a pressed steel bulkhead and largely interchangeable aluminium body panels. Differences between long and short wheelbase variants were minimal and generally restricted to different size wheels and tyres, different specification springs reflecting different payloads and a heavier duty rear axle in the LWB models. The design was such that construction of both left and right-hand-drive configuration vehicles was straightforward. Colour choices were kept to a minimum and the Land Rover remained the definitive farm vehicle in rural areas not least because of the Land Rover's towing ability for pulling horse boxes and livestock trailers.

The distinctive Station Wagon models - unofficially referred to as 'Safari' models became popular with overland travellers and were often seen on location in TV nature programmes, in the National Geographic magazine and in the hands of aid agencies all of which promoted the Land Rover which had most of the lightweight 4x4 market to itself especially in export markets such as Australasia and Africa. In Africa it has been suggested that the first motor vehicle much of the population ever saw was a Land Rover.