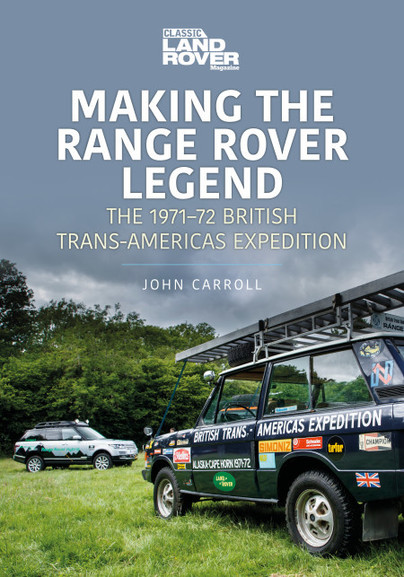 Preorder
Add to Wishlist
You'll be £11.99 closer to your next £10.00 credit when you purchase Making the Range Rover Legend. What's this?
+£4.50 UK Delivery or free UK delivery if order is over £35
(click here for international delivery rates)

At the bidding of a London-based committee, a team from the British Army undertook the challenge of driving the Pan-American Highway in its entirety from Alaska to Tierra Del Fuego. This would include finding a route for the projected road through Darién in Panama by crossing the notorious Darién Gap. The Gap was approximately 200 miles long in Panama and northern Colombia and was the missing link in the intercontinental highway’s entire length. It would take almost 100 days of concerted effort for the British Trans-America Expedition to drive, winch and float two Range Rovers through this trackless jungle terrain. The British Trans-America Expedition of 1971/72 wasn’t the first to cross the Darién Gap with vehicles as it followed in the wake of expeditions in 1960 and 1961 that variously used a Land Rover, a Jeep pick-up and Chevrolet Corvair cars. However, its Range Rovers were the first vehicles to cover the whole distance from Alaska to the southern tip of Argentina, a journey that has become legendary and did much to forge the legend of the Range Rover SUV, which was unveiled just a year before the expedition took place. This book looks at the history of the Darién region and the expeditions of 1960 and 1961 that set the scene for the epic 100 days of Darién a decade later. It contains reminiscences and anecdotes from eight members of the expedition – six soldiers and two Rover Company engineers – as well as previously unpublished photographs, decorative maps and commemorative postal covers.