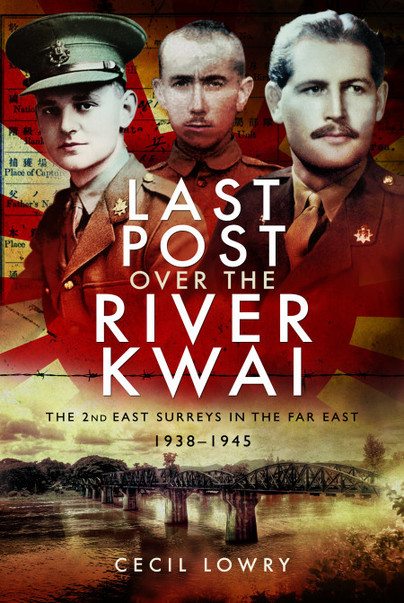 Click here for help on how to download our eBooks
Add to Basket
Add to Wishlist
You'll be £4.99 closer to your next £10.00 credit when you purchase Last Post over the River Kwai. What's this?
Need a currency converter? Check XE.com for live rates

Last Post Over the River Kwai is the carefully researched account of the experiences of the officers and men of 2nd Battalion The East Surreys during the Second World War.

Stationed in Shanghai in the early 1940s, the Battalion was deployed to Malaya and fought gallantly to slow the Japanese advance. After heavy losses the survivors found themselves POWs in Singapore in February 1942 after the humiliating surrender which Churchill described as Britain’s worst ever military disaster.

The next three and a half years saw members of the Battalion suffering appalling hardship at the hands of their brutal Japanese captors, whether in Singapore, on the Death Railway, Malaya or Japan itself, as wells as on hellships. Many died but remarkably the majority survived to tell their story. Their prolonged captivity with unbelievable hardship, deprivation and cruelty makes for distressing but inspiring reading.

In a carefully researched book, meeting survivors and corresponding with next-of-kin, Cecil Lowery describes the battle for Malaya and the men's appalling suffering at the hands of the Japanese captors. In their three years as prisoners of the Japanese, they were brutalised in prison camps in Malaya and Japan , many others died building the infamous Death Railway in Thailand or in overcrowded holds of prison ships, victims of target hunting American submarines.

The “Last Post Over the River Kwai” is a very inspirational book and a must read – especially if you’re interested in the Malayan campaign. It is filled with tragedy and cruelty, but also with humor and kindness. LPORK is masterful at showing us mankind at his lowest possible and also at his highest. I am very thankful to have been able to read their story.

This is a story of great endurance, personal courage and Regimental pride so deserves to be told, and re-told so we never forget.