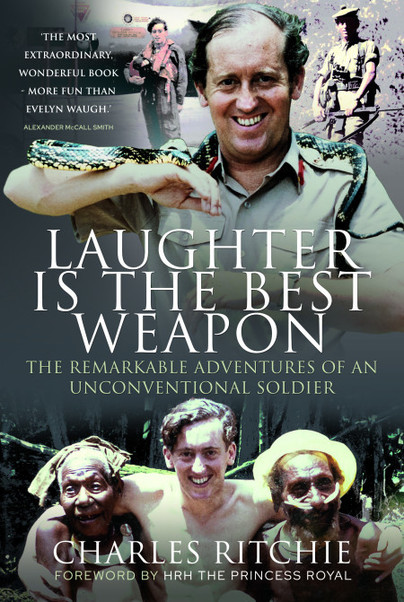 Laughter is the Best Weapon (Hardback)

The Remarkable Adventures of an Unconventional Soldier

Add to Basket
Add to Wishlist
You'll be £16.00 closer to your next £10.00 credit when you purchase Laughter is the Best Weapon. What's this?
+£4.50 UK Delivery or free UK delivery if order is over £35
(click here for international delivery rates)

“An army may march on its stomach but it leans on its funny bone.” So says Brigadier Charles Ritchie, and he should know. Postings to the Yemen, Northern Ireland, Bosnia and other far-away trouble spots gave him many opportunities to demonstrate that the ability to laugh – and make others laugh – is an invaluable skill in an officer’s kitbag.

In Laughter is the Best Weapon – the Remarkable Adventures of an Unconventional Soldier, Charles abandons the popular trend for military heroism and angst-ridden confessions. Instead he leads the reader on a forthright yet light-hearted and self-deprecating journey through his 38 years’ service as a Royal Scot. In the process we witness his sometimes significant, but often comedic, participation in a wide range of recent British military operations.

If you prefer your military history more entertainingly honest than earnestly intellectual and your soldiers hilariously slapstick rather than heroically stoic, then this is the book for you. Liberally sprinkled with career-limiting cock-ups, bizarre near-death experiences and the clatter not of gunfire but shameless name-dropping, these delightfully varied anecdotes deliver a hugely entertaining glimpse into the extraordinary life of one of the British Army’s most spirited and loveable characters.

Humour and incredulity fill every page, making it a must-read for anyone who served with the author and for anyone who enjoys a larger-than-life outlook. Lock in to laughter mode, prepare to wipe away your tears and this book will entertain you at every turn.

Pennant Magazine - THE JOURNAL OF THE FORCES PENSION SOCIETY, Spring 2022, No 177

"It is highly recommended and the generation of Cold War warriors, like your reviewer, who trod similar paths in the latter half of the twentieth century will find it hard to put down."

Charles' book is a wonderfully anecdotal account of his extraordinary career, told with great modesty, an irrepressible sense of humour, and with evident affection for his fellow human beings .

I've enjoyed all the books I've received ARCs for from Pen & Sword, so when this was one of their featured books, I clicked on it, despite not being too interested in British military history. I expected a pompous book that glorified British military superiority and filled with nostalgia for Empire. I was pleasantly surprised to find that this book wasn't like that at all. The book's very self-deprecating, and well-written, and it's difficult to write humour, as easy as it is to read. The author hasn't picked any self-glorifying anecdotes to narrate at all, and he sounds like he would have been an excellent raconteur in person! I found the period he covers fascinating-the dissolution of the British Empire with the independence of colonies, and his experiences in those places, and through the heights of the Cold War, where he was stationed in East Berlin. The only instance where he abandons all attempts at humour is a harrowing, moving chapter on the Srebrenica massacre in 1995, where he describes his experiences with NATO and their tragically ultimately futile attempts at alerting the UN to provide more troops and the potential for disaster. This was an extremely illuminating chapter that throws light on the devastation of the war, and the complete inadequacy of NATO troops stationed in that theatre.
This was a very entertaining book to read, and I would recommend it very highly, to anyone suffering from a book reading slump during this pandemic.

The foreword by Princess Anne is excellent. This book is definitely worth reading and Charles Ritchie definitely sounds like someone worth knowing, which I do now, a little, thanks to this book.

Absolutely superb. I loved every moment of this book from start to finish – including the excellent foreward by HRH Princess Anne – and just couldn’t put it down until I’d finished...then was a bit disappointed it was over!
Unrelentingly self deprecating, yet unapologetically outrageous in places the style is genuine, funny, compassionate and honest.
>From run ins with royalty and rock stars to close shaves and incredible escapes from some extremely tricky situations, the ‘chapters’ are short, snappy and captivate the reader despite covering a huge range of geographies, incidents, postings and more.
Having family and friends who have served in the military I was aware that there japes aplenty but some of the pranks in this book should win awards for creativity, bravery (stupidity possibly too – it’s fine line to tread!) and downright incredulity on occasion.
I was devastated to realise the author is sadly no longer with us, but this book, in his own words and with a lovely tribute from his wife at the end, will hopefully provide a fitting legacy to a gentleman who was undoubtedly an absolute legend in his time.

Charles Ritchie was educated at Wellington College and, despite a childhood desire to act, entered the Royal Military Academy Sandhurst in 1960. Commissioned into The Royal Scots, his 38-year military career took him all over the world and he shares his many often hilarious experiences in this book.

Charles rose to Brigadier, served as Colonel of his Regiment and was decorated with the MBE, OBE and CBE. After retiring, he became Secretary at The New Club, Edinburgh, a Director of the Edinburgh Military Tattoo and an officer in The Queen’s Bodyguard for Scotland (Royal Company of Archers). He also served his local community as Chairman of the Black Mount Community Council and Honorary President of the West Linton & District Pipe Band.

He and his wife Araminta have lived in Dolphinton, South Lanarkshire since 1998. Charles’s interests included shooting, tennis, curling, politically incorrect speeches, singing and extreme partying with his many friends. Urged for many years to record his adventures, he delivered his manuscript to Pen & Sword Books on 14 December 2020, two days before his tragic death.