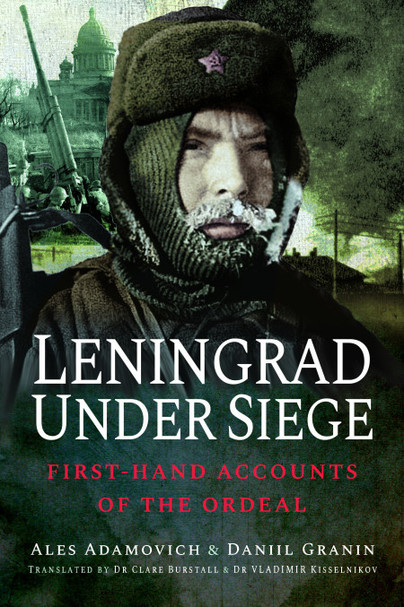 First-hand Accounts of the Ordeal

Add to Basket
Add to Wishlist
You'll be £15.99 closer to your next £10.00 credit when you purchase Leningrad Under Siege. What's this?
+£4.50 UK Delivery or free UK delivery if order is over £35
(click here for international delivery rates)

Leningrad was under siege for almost three years, and the first winter of that siege was one of the coldest on record. The Russians had been taken by surprise by the Germans' sudden onslaught in June 1941.

This book tells the story of that long, bitter siege in the words of those who were there. It vividly describes how ordinary Leningraders struggled to stay alive and to defend their beloved city in the most appalling conditions. They were bombed, shelled, starved and frozen. They dug tank-traps and trenches, built shelters and fortifications, fought fires, cleared rubble, tended the wounded and, for as long as they had strength to do so, buried their dead. Many were killed by German bombs or shells, but most of them died of hunger and cold.

Based on interviews with survivors of the siege and on contemporary diaries and personal memoirs. The primary focus is on three people: a young mother with two small children, a boy of sixteen at the outbreak of war, and an elderly academic. We see the siege through their eyes as its horrors unfold and as they struggle to survive.

Primary source material from those who were there. The siege of Leningrad was a long and bloody contest between two ideologies that did not worry deeply about high casualty rates – Very Highly Recommended

This fantastic book covers the period in the life of this great city that inspired the great Dimitri Shostakovich to write his longest, mightiest and most inspirational symphony, the Seventh. The book reminds me of the brilliant film Dunkirk (the most recent one, featuring Kenneth Branagh) in the way that it homes in on the lives of the three key figures chosen by the author to represent the experiences of the citizens of Leningrad during that three-year siege. Brilliant.

It is difficult to say that a book about the suffering of a city is 'enjoyable', but this book with its focus on the diaries of three citizens is able to maintain the everyday context of life in Leningrad despite the fears and privations. Therefore these three people offer some proof that the human spirit can meet challenges that might otherwise be thought impossible. A useful book to read alongside the usual military history of the siege of Leningrad.