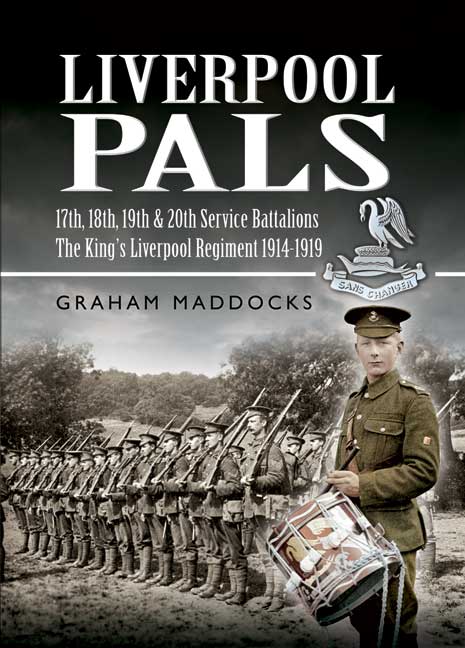 Click here for help on how to download our eBooks
Add to Basket
Add to Wishlist
You'll be £4.99 closer to your next £10.00 credit when you purchase Liverpool Pals. What's this?
Need a currency converter? Check XE.com for live rates

Liverpool Pals, is a record of duty, courage and endeavour of a group of men who, before war broke out in 1914, were the backbone of Liverpool's commerce. Fired with patriotism, over 4,000 of these businessmen volunteered in 1914 and were formed into the 17th, 18th, 19th and 20th (Service) Battalions of the King's (Liverpool Regiment); they were the first of all the Pals battalions to be raised, and they were the last to be stood down.

It is commonly held that the North of England's Pals battalions were wiped out on the 1st July, 1916, certainly this befell a number of units, but the Liverpool Pals took all their objectives on that day. From then on they fought all through the Somme Battle, The Battle of Arras and the muddy hell of Passchendaele in 1917, and the desperate defence against the German offensive of March 1918.

This is a nicely executed book that brings to life the Liverpool PALS. The text is crisp and the images are carried through the body of the book to produce an emotive picture of one of the joys and sorrows of WWI. All enthusiasts of the Great War will want to buy a copy, and it should sell very well in Liverpool, but it is a book that reaches out from the mud of Flanders with an engrossing human story. Recommended.

The author has researched thoroughly and included a good bibliography, making this a valuable reference book of an important aspect of the British Expeditionary Force that performed so effectively and courageously against great numbers of German formations.

If you have ancestors who fought in the Liverpool Pals in WW1, this reprinted history of the 17th, 18th, 19th and 20th (Service) Battalions of the King's Liverpool Regiment will be a real boon.
It not only records the soldier's names but also their duty,courage and endeavour.
Packed with images and useful information.

This book on the Pals, packed full of stories and photos, was originally published in 1991 and this is an updated version in a new format, which is greatly welcomed as it was one of the best written of the Pals series covering a fascinating unit. Highly recommended.

A well illustrated and important book, particularly if you're researching men who served with these units during the First World War.