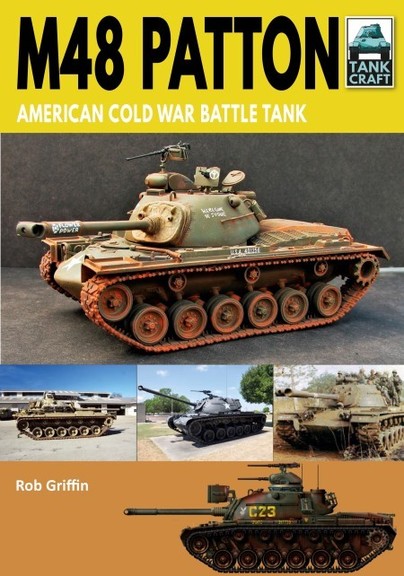 The M48 Patton main battle tank was one of the most successful and longest-serving designs produced in the United States, and it is a popular subject with tank modellers and enthusiasts. When it came into service in 1949 it represented a significant advance on the Sherman and M47 which it replaced, and it formed the backbone of American armoured forces during the early years of the Cold War. It also saw combat in Vietnam, during the Indo-Pakistan wars and in the Middle East, in particular during the Iran-Iraq War. So it is an fascinating subject for this volume in the TankCraft series.

Archive photos of the M48 in service and extensively researched colour profile illustrations depict the tank throughout its operational life. A large part of the book showcases available model kits and aftermarket products, complemented by a gallery of beautifully constructed and painted models in various scales. Technical details as well as modifications introduced during production and in the field are also examined and provide everything the modeller needs to recreate an accurate representation of the M48.

Author Rob Griffin is a well-known expert on Post - War armour and his engaging text never disappoints. This book is another great addition to the Tank Craft series that it will prove invaluable for model makers building the M48 Patton with the close up photographs being of particular interest. Highly recommended to model makers interested in this often overlooked Main Battle Tank.

The TankCraft series is aimed at the modelling enthusiasts but has become popular with a much wider readership. This new addition covers the M48 Patton series of tanks and follows the successful format of many full colour images of the subject and available model kits, combined with good text in captions, extended captions, introduction and tank history. – Very Highly Recommended.

One for the model-makers among you - a thoroughly comprehensive and beautifully-illustrated look at the M48 Patton tank.

The book is lavishly illustrated with images that walk us through its immediate predecessors and on through its development and early service right through to present day variants up armed, armoured, and engined to the point that they are still a potent adversary on many of the worlds battlefield. It is a tribute to the M48s original designers that the basic vehicle was capable of being constantly upgraded to maintain its relevance.

The book is perhaps aimed mainly st the model making community with a section on the various kits of the M48 available, but that doesn’t mean there is not a lot here for the armour enthusiast. The vehicle has seen action in its various guises in Vietnam, the Middle East (on both sides), the Indo/Pakistan conflict, and many Brushfire wars In between. An excellent addition to the series I shall be looking out for others.

This is another excellent title in the growing and comprehensive Tank Craft Series by the publisher.

This offering from Pen and Sword as part of their Tank Craft book series has a lot going for it in my opinion. I appreciate that the author has opted to cover fewer models in the built section and provided more information and detail on each of the models than many of the other offerings provided. The quality overall is good in my opinion.

Another of the features of the series is a section that portrays models of various brands assembled and painted by professional model makers. In this case the book illustrates three 1/35 scale models. However, given the fact that the tank has been operating for 60 years, many model brands have ventured into portraying this iconic vehicle, in all available scales. A section illustrating the strengths and weaknesses of the various kits on the market is dedicated to these various versions.

A section on the vehicle in action completes the book, with a description of the various conflicts in which it was used.

Another excellent addition to the TankCraft series, and any modeller interested in this Cold War MBT, one which was built in large numbers.