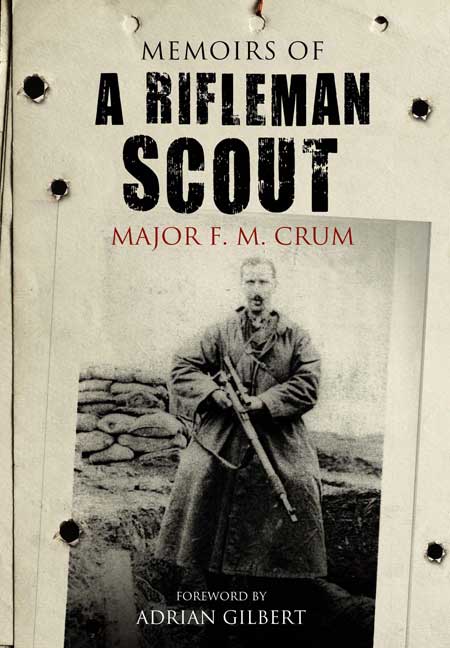 Memoirs of a Rifleman Scout (Hardback)

Add to Basket
Add to Wishlist
You'll be £25.00 closer to your next £10.00 credit when you purchase Memoirs of a Rifleman Scout. What's this?
+£4.50 UK Delivery or free UK delivery if order is over £35
(click here for international delivery rates)

Order within the next 1 hour, 48 minutes to get your order processed the next working day!

Frederick Maurice Crum (1879–1952) fought in the Second Boer War (1899–1902) in the Mounted Infantry, where he was wounded and taken prisoner. After peacetime service in India he retired due to the effects of his injuries, and became involved in the Boy Scout movement, founding the 7th Troop of Boy Scouts at Stirling in Scotland in 1909. On the outbreak of war in 1914 he rejoined the Rifle Corps and served with its 8th Battalion in France until 1919, specialising in trench sniping.

Made up from his extensive diaries and letters to family and friends at the time, this book details the development of sniping in the British Army in the First World War. It was through the work of expert marksmen and trainers like Major Crum that the initial dominance of the Germans in this type of fighting was eventually overcome. These memoirs provide a unique insight into the life of a British Army officer before and during the First World War. Major Crum's involvement in the Boy Scout movement is also a fascinating account of that organisation's origins, showing what the true motives behind its foundation were.

With a new Foreword by sniping expert Adrian Gilbert, this is not only a first-rate memoir of sniping in the trenches, but also of a long, outstanding life of bravery

I have had the pleasure of reading this fascinating publication by Frontline Books.
‘The Memoirs of a Rifleman Scout by Major F M Crum’ This book delves headlong into the wide variety of experiences gained by the author during his life and travels as part of the British Army. This well written and interesting account draws the reader in and gives a real insight and understanding into the various battles and encounters Crum experienced in the field. The author’s military journey started in South Africa against the backdrop of the Second Boer War and moves through to the infancy of sniping in the First World War. Towards the final chapter Major Crum discusses his involvement in the creation of the Boy Scout movement.

As eluded, the author begins his story during the build up to the Second Boer War. The author describes, in context, the coming conflict and the mood of soldiers shipped there to fight. Reading his words makes you realise what a different army it was back then and how the British Army was to change in a matter of twenty years. To some degree the rule book was still being written. The relationships between soldiers and officers and those further up the chain of command were, to some extent, a more relaxed affair. This is reflected in the graphic accounts of skirmishes and retreats that seemed to dominate a large amount of this conflict, at least from the authors standpoint.

Many entries in these memoirs are of a personal nature. The reader gets a good understanding of real life experiences, such as his words on the wounding or death of close friends during this tumultuous time, accounts, which in other books may have been missed. The author reflects how he and his fellow men dealt with conflict and the aftermath of battle. Following the Boer War, Major Crum describes his time in Malta, India and Scotland, the latter being the build up to the First World War. Lord Kitchener was calling upon men to join up and serve their country.

As the First World War started to gain momentum the reader is lead into the trenches. Utilising some really good descriptive writing, Major Crum vividly brings his first hand experiences of trench warfare to life. From the dug outs not fit for a tramp as he put it, to the maze of trenches constantly under bombardment from all types of weapons. The smell and heat from liquid fire to bombing, shelling and the constant crack of rifle and machine gun fire flying overhead. In this landscape the art of sniping was devised and perfected amongst a small group of dedicated rifleman who, in the early stages, purchased their own telescopic sights, rifles and trench periscopes. These riflemen were always on the look out for new ways to improve and out smart the enemy at their own game.

I thought this book was a fascinating read and I highly recommend it.

Memoirs of a Rifleman Scout provides a comprehensive account of the development of First World War sniping in the British Army... This important book was first published in 1950 and survives in this edition as a fascinating incite into war service.

Compiled from Major F. M. Crum's diaries, as well as letters to family and friends, this book is a crucial read for those who are interested in the history and advancement of sniping during the First World War.

With the memoir covering both the Second Boer War and the Great War (which comprises the second half of the book) readers get a flavour of the life of the front-line British soldier, and Major Crum's style of narrative is both candid and easy to read.

While this book is undeniably of value for its illumination of trench warfare, the writer has a distinct voice of his own, which makes it doubly valuable.