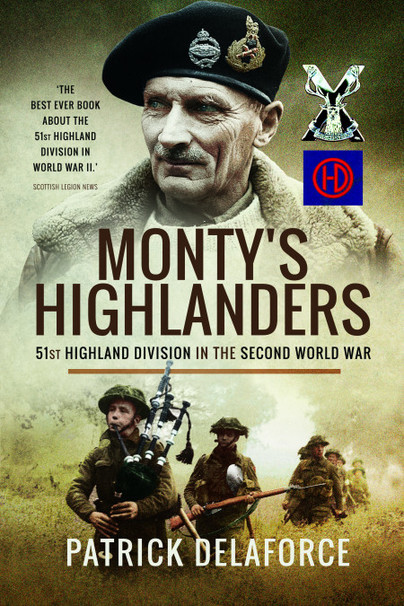 Add to Basket
Add to Wishlist
You'll be £12.99 closer to your next £10.00 credit when you purchase Monty's Highlanders. What's this?
+£4.50 UK Delivery or free UK delivery if order is over £35
(click here for international delivery rates)

After the 1940 disaster at St Valry when many were killed or captured, the re-formed 51st were a superlative division, brilliantly inspired and led. The Highway Decorators (after their famous HD cypher) fought with consummate success through North Africa and Tunisia and from Normandy into the heart of Germany. Blooded at Alamein where they suffered over 2000 casualties they pursued the Afrika Korps via Tripoli and Tunis fighting fierce battles along the way. They lost 1,500 men helping to liberate Sicily. Back to the UK for the second front, the Highlanders battled their way through Normandy bocage, the break-out to the Seine, triumphal re-occupation of St Valry, and were the first troops to cross the Rhine, fighting on to Bremen and Bremerhaven. In the eleven months fighting in NW Europe in 1944 and 1945 the Highlanders suffered more than 9000 casualties.

This in a nutshell is a very affordable, first rate history of first rate division written by a first rate author with actual wartime battlefield experience and therefore I am sure it will appeal to a wide range of readers, especially those with an interest in this particular division and the men who served in it.