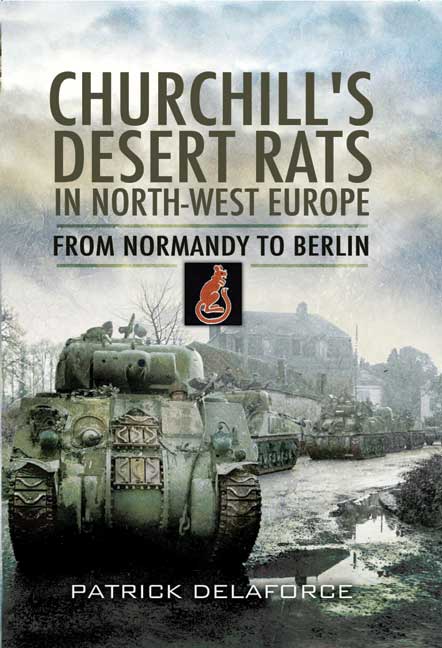 From Normandy to Berlin

Click here for help on how to download our eBooks
Add to Basket
Add to Wishlist
You'll be £4.99 closer to your next £10.00 credit when you purchase Churchill's Desert Rats in North-West Europe. What's this?
Need a currency converter? Check XE.com for live rates

When Montgomery took command prior to D-Day he gathered around him commanders and formations he knew and trusted. Not surprisingly 7th Armoured Division was one of these and they were deployed from Italy to England.

In this fine account the author who fought alongside the Desert Rats describes the Division's battles from the beaches, the breakout battles (Goodwood and Bluecoat), the liberation of Northern France and Belgium. After taking Ghent there were the long months fighting in the Peel country of the Netherlands before Operation BLACKCOCK, the Rhine Crossing and the final advance into Germany, the capture of Hamburg and the Allies' triumphant entry into Berlin.

No reader of this magnificent history, with its many personal accounts will question why the Desert Rats wore – and still wear – their Jerboa insignia with such pride.

Patrick Delaforce fought with the Gunners in North West Europe. After a career in the wine trade he became an author and has published numerous works on the Second World War, a number in print with Pen and Sword. He lives at Brighton.

The Desert Rats, or 7th Armoured Division to give them their correct title, was one of the most successful and formidable army divisions of the British Army in WW2 and in this sequel to his book ' Churchill's Desert Rats in North Africa, Burma, Sicily and Italy', former Desert Rat and well known author Patrick Delaforce describes the Divisions gruelling and hard fought actions in Western Europe, from the D-Day beaches to the eventual fall of Berlin. Anyone with an interest in the history of the Deserts Rats will find this book a fascinating read. The inclusion of a number of original black and white photographs, maps and insightful first hand accounts all help to make this a fascinating insight into some of the pivotal actions fought on the Western Front and well worth a read.