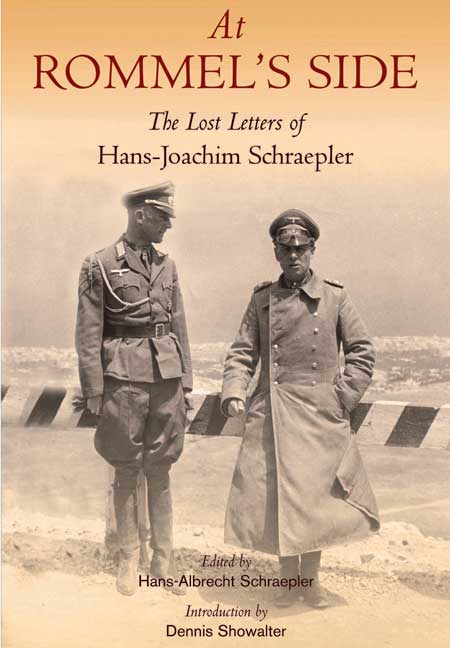 At Rommel's Side (ePub)

Click here for help on how to download our eBooks
Add to Basket
Add to Wishlist
You'll be £4.99 closer to your next £10.00 credit when you purchase At Rommel's Side. What's this?
Need a currency converter? Check XE.com for live rates

Erwin Rommel, Hitler's so-called 'Desert Fox', is possibly the most famous German Field-Marshal of WWII. He is widely regarded as the one of the most skilled commanders of desert warfare and, in contrast to other leaders of Nazi Germany, is considered to have been a chivalrous and humane officer.

The letters of his adjutant provide a unique picture of Rommel during his time in Libya. Hans-Joachim Schraepler was by Rommel's side in North Africa for ten crucial months in 1940-41. During that time, he wrote to his wife almost every day. In most cases, the correspondence went via the usual channels but occasionally he used other methods to avoid the censor's gaze.

Through his letters, Schraepler supplies a vivid image of the first phase of the North Africa campaign. He covers the siege of Tobruk, the capture of Benghazi, and the difficulties experienced by those fighting in Cyrenica and the wider North African theatre. He also complains that the Italian were poor Allies, lacking training and leadership, and that Berlin regarded North Africa as a theatre of only secondary importance.

Schraepler also provides insights into Rommel's character - his dynamism and tactical skill, along with the growing 'cult of personality' which seemed to surround him. One of his unofficial tasks, for example, was to respond in Rommel's name to much of the fan mail that arrived at the Afrikakorps HQ.

Hans-Albrecht Schraepler was only seven years old when his father died. The cache of letters was held by his mother and remained untouched for sixty years. His father's last letter, found the day of his death, remains unfinished.


Letters that provide a vivid impression of the first phase of the North Africa campaign and reveal the Italians were poor Allies and that Berlin saw North Africa as a theatre of only secondary importance.

Hans-Albrecht Schraepler served as a German diplomat in Saigon, Beijing, Paris, Mali, Liberia and the Ivory Coast. He was Director of Information for the Council of Europe and a member of London’s Royal College of Defence Studies. Denis Showalter has been a Professor of History at Colorado College since 1985. His recent publications include Patton and Rommel and Hindenburg: Icon of German Militarism.