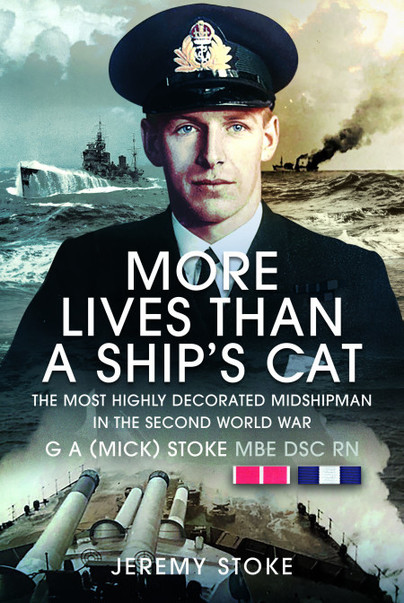 The Most Highly Decorated Midshipman in the Second World War

Add to Basket
Add to Wishlist
You'll be £20.00 closer to your next £10.00 credit when you purchase More Lives Than a Ship’s Cat. What's this?
+£4.50 UK Delivery or free UK delivery if order is over £35
(click here for international delivery rates)

By any standards Mick Stoke’s experiences in the Royal Navy during the Second World War were remarkable. Aged nineteen, he was ‘Mentioned in Despatches’ and awarded the Distinguished Service Cross for his courage during incessant bombing during the Siege of Tobruk.

He survived multiple torpedo attacks, firstly serving on the cruiser Glasgow, which was hit twice; on the battleship Queen Elizabeth at sea and blown up by human torpedoes at Alexandria; and on HMS Hardy, struck in January 1944, while escorting Russian Arctic Convoy JW56B.

In 1942, he was serving on HMS Carlisle during the fiercely fought Malta convoys and took part in the Battle of Sirte. Later that year he was awarded the MBE ‘for outstanding bravery, resource and devotion to duty during very heavy bombing’ at the port of Bone during Operation TORCH. He went on to serve at D-Day and later in the Pacific on HMS Rajah.

It is a privilege to read Mick Stoke’s graphic and modest account of his naval service in the Second World War. Readers will appreciate and understand how he became ‘The Most Highly Decorated Midshipman in the Royal Navy’.

"Absolutely delighted and the front cover is fantastic. Very professionally published and a real tribute to your father. Our parent’s generation continue to be an inspiration to us all, especially in the troubled world we live in now. I can't wait to open the first page"

G A (Mick) Stoke MBE DSC RN entered Dartmouth Royal Naval College in January 1940, completing his training on the cruiser HMS Glasgow. His son describes his war service in this fascinating book which draws on his letters to his parents and Doreen Le Poidevin, whom he later married. They had three sons.

After being invalided out of the Navy in 1947, he pursued wide-ranging commercial interests, winning the Queen’s Award for Exports.

In addition to his MBE and DSC, he was awarded the Atlantic Star, Africa Star, Italy Star, Arctic Star, Arctic Emblem, the Soviet Russian Convoy Medal and the Pacific Star. Mick died aged 70 in 1991.

Jeremy Stoke, the youngest of Mick’s sons, retired after a successful business career and became the Family archivist and researcher. In 2020, reading his Father’s carefully preserved letters and documents he decided that Mick’s remarkable wartime exploits deserved to be published.