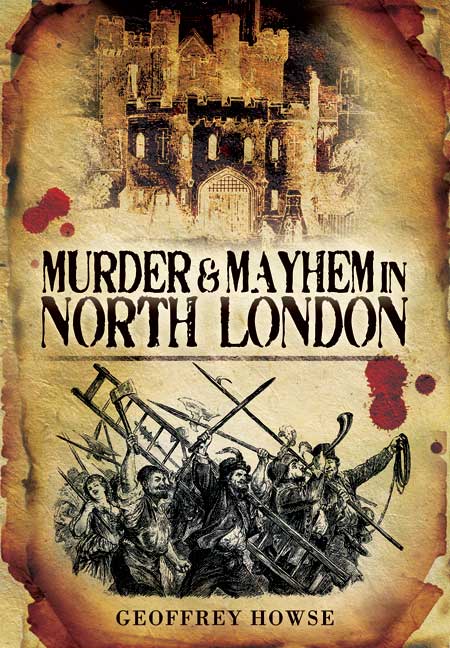 Add to Basket
Add to Wishlist
You'll be £12.99 closer to your next £10.00 credit when you purchase Murder and Mayhem in North London. What's this?
+£4.50 UK Delivery or free UK delivery if order is over £35
(click here for international delivery rates)

Geoffrey Howse delves into the his crime files covering 200 years of the area's darkest past. Events covered include long forgotten cases that made the headlines in their day as well as others more famous: Britain's first railway murder, the first criminal to be caught via wireless telegraphy and the anarchists who left a trail of murder and mayhem following a raid on a Tottenham factory. There are many other cases to appeal to anyone with an interest in the local and social history of North London.

In this fascinating and gruesome work, Geoffrey Howse details some of the many and multifaceted murders which have occurred in North London, spanning the period from 1678 to 2005. Beginning with the unsolved murder of Sir Edmund Berry Godfrey, Howse moves through a cavalcade of beatings, stabbings, suicides and shootings, some infamous, others almost forgotten, including Britain's first railway murder, and the first criminal to be caught via wireless teleraphy. Not for the faint-hearted, 'Murder & Mayhem in North London' is a brilliantly researched study of the varied and complex ways in which man has disposed of his fellows in one part of the capital, as well as the both changing and constant reasons for doing so.

Read about 200 years of long-ago abandoned trials and tribulations of north London criminality in this captivating historical recollection of curious cases. The book includes the accounts of the first railway murder, the foreign anarchist who left a trail of murder and disorder after a wage snatch at a Tottenham factory, and the first offender to be remanded by means of wireless telegraphy, among others. From bodies discovered in an Islington warehouse cellar, to the shooting of a vicar in Stamford Hill, and burned corpses found in Camden; this interesting read will provide a curiously satisfying point of reference for those with an interest in murder history books, and the criminal mind alike.

Written by local historian Geoffrey Howse, Murder & Mayhem in North London contains an appetizing variety of tales of murder, colourfully illustrating, as the author himself puts it, the many ways in which man 'can do away with a fellow man'. A plethora of cases are covered here, with many requiring just a page or succinct paragraph. Howse's coverage takes a chronological format with chapters devoted to periods of North London's history. We are taken as far back as the 17th century's 'Murder of a Magistrate' and other long forgotten cases famous in their day, such as Britain's first railway murder and the Brides in the Bath murderer. Howse then delves into his files to cover more famous cases in-depth, such as that of Ruth Ellis, which was infamous in the 1950s, and continues right up to the modern day with detailing of some of the area's gruesome recent murders. Like any book which discusses such a theme, this is not for the feint-hearted, however for those interested in North London's social and criminal history there is certainly plenty here to arouse curiosity. Whether a brief paragraph or whole chapter, Howse puts the case across coolly and factually, often including dialogue and court statements from the parties concerned which successfully serves as constant reminder to the harsh realism of the subject at hand. You won't be able to put this down.