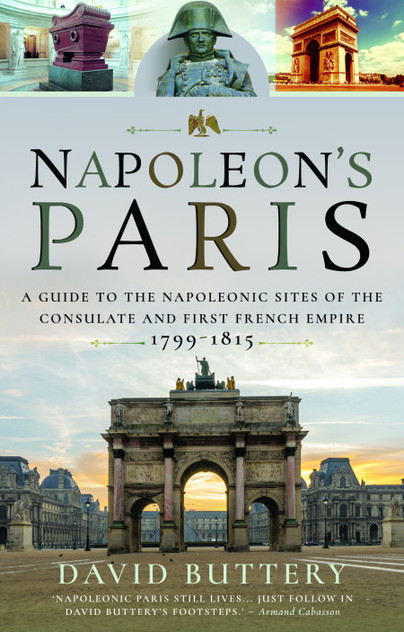 Preorder
You'll be £11.99 closer to your next £10.00 credit when you purchase Napoleon's Paris. What's this?
+£4 UK Delivery or free UK delivery if order is over £30
(click here for international delivery rates)

Napoleon Bonaparte was one of the most influential rulers in European history. Renowned as a military commander, he was also a great statesman, administrator, lawmaker and builder – and his civic achievements outlived and arguably eclipsed his victories on the battlefield. Yet while there are a host of biographies and studies of his military and political career, few books have been written about his connections with Paris, the capital of his empire, where many remarkable buildings and monuments date from his time in power. That is why David Buttery’s highly illustrated guidebook to Napoleon’s Paris is such a timely and valuable addition to the literature designed for visitors to the city.

Many of the most famous sites in the city were built or enhanced on Napoleon’s instructions or are closely associated with him and with the period of the First French Empire – the Arc de Triomphe, the Louvre, the Hôtel des Invalides, Musée de l'Armée, Notre Dame Cathedral, Père-Lachaise Cemetery among them. David Buttery’s guide covers them all in evocative detail. His work is essential reading for every visitor to Paris who is keen to gain an insight into the influence of Napoleon on the city and the tumultuous period in French history in which he was the dominant figure.

Being genuinely interested in the Napoleonic times and loving Paris, this book has been a real treat for me. It's informative and interesting while it also provides loads of useful information. The balance of text and illustration is perfect, too.

A well-researched guidebook. Definitely for someone with a basic familiarity with both Napoleon and Paris, but provided a nice overview of points of interest and some less travelled attractions (I specifically enjoyed the section on Pere Lachaise).

Many times, Mr. Buttery refers to this book as a "guidebook" but it is so much more than that. Reading this book and searching for images of places, people, and objects mentioned, I feel like I've had a fully-guided tour of Paris and gained a great deal of knowledge about its history. Everything you could want to know is included (the length of the index tells you all you need to know) both before and during a trip to Paris. If I ever manage to get to France again, I will be bringing this book with me.

This is more than a book. Buttery gives us a deeply humane and expansive look at Paris through places connected with Napoleon. But it's not just Napoleon, nor just his time. The interweaving of place, events, culture and lives lived, makes this a permanent reference of how a world develops and reaches across generations. Paris, Napoleon, France, wars, and how we relate to them and their significance is not singular. Buttery is a companion as we understand those relationships. A marvelous book, full of marvel. I would recommend this book to anyone.

This book opened my eyes a bit more to what I've been missing. It was really good, and the authors perspective on the subject really came through. I highly recommend!