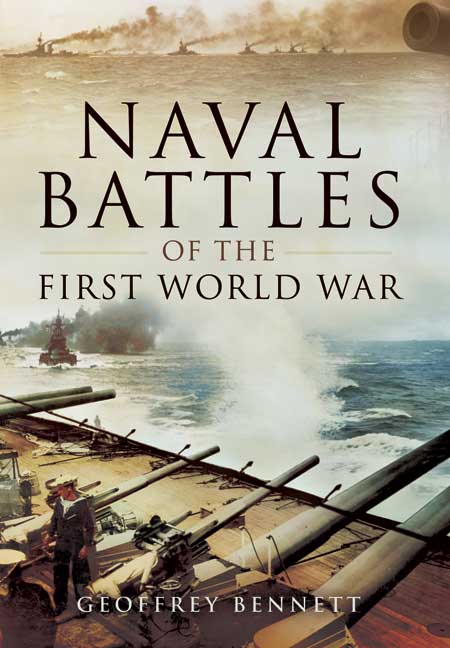 Add to Basket
Add to Wishlist
You'll be £14.99 closer to your next £10.00 credit when you purchase Naval Battles of the First World War. What's this?
+£4.50 UK Delivery or free UK delivery if order is over £35
(click here for international delivery rates)

With the Call to action stations in August 1914, the Royal Navy faced its greatest test since the time of Nelson.

This classic history of the Great War at sea combines graphic and stirring accounts of all the principal naval engagements - battles overseas, in home waters and, for the first time, under the sea - with analysis of the strategy and tactics of both sides. Geoffrey Bennett brings these sea battles dramatically to life, and confirms the Allied navies' vital contribution to victory.

Extensive photographs, include key aspects such as the German battle cruiser Blucher at the Dogger Bank battle, the destruction of the British battle cruiser Queen Mary, as well as the German dreadnaught Bayern sinking after being scuttled at Scapa Flow. A fascinating diagram shows Battleship Turrets which provides insight into the process of action, such as the shell room, cordage charge, magazine, to the cordite hoist and gun.

Overall this is a good introduction to the major British naval campaigns of the First World War. It was written long enough after the First World War to ensure that good sources were available from both sides (and long enough after the Second World War to allow a neutral tone). The level of detail is about right for a general history - not too detailed, but with in-depth material when required. Most recent books on this topic tend to focus on a single topic (Jutland or von Spee being the favourites), so despite its age this is still a useful single volume history of the main events at sea during the First World War.

This is an essential history of naval warfare during World War One. It is strongly recommended, providing balanced, insightful accounts and judgements. The illustration is of the highest quality.