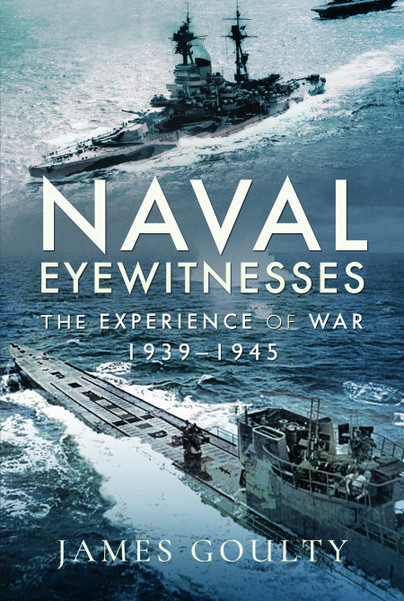 Preorder
Add to Wishlist
You'll be £20.00 closer to your next £10.00 credit when you purchase Naval Eyewitnesses. What's this?
+£4.50 UK Delivery or free UK delivery if order is over £40
(click here for international delivery rates)

Although many books have been written about naval actions during the Second World War – histories and memoirs in particular – few books have attempted to encompass the extraordinary variety of the experience of the war at sea. That is why James Goulty’s viv-id survey is of such value. Sailors in the Royal Navy and the Merchant Navy experienced a war fought on a massive scale, on every ocean of the world, in a diverse range of ves-sels, from battleships, aircraft carriers and submarines to merchant ships and fishing boats. Their recollections are as varied as the ships they served in, and they take the reader through the entire maritime war, as it was perceived at the time by those who had direct, personal knowledge of it.

Throughout the book the emphasis is on the experience of individuals – their recruit-ment and training, their expectations and the reality they encountered on active service in many different offensive and defensive roles including convoy duty and coastal de-fence, amphibious operations, hunting U-boats and surface raiders, mine sweeping and manning landing and rescue craft. A particularly graphic section describes, in the words of the sailors themselves, what action against the enemy felt like and the impact of casualties – seamen who were wounded or killed on board or were lost when their ships sank.

A fascinating inside view of the maritime warfare emerges which may be less heroic than the image created by some post-war accounts, but it gives readers today a much more realistic impression of the whole gamut of wartime life at sea.

James Goulty holds a masters degree and doctorate in military history from the University of Leeds, and he has a special interest in the training and combat experience of ordinary soldiers during the world wars and Korean War. His previous publications include Second World War Lives: A Guide for Family Historians, The Second World War through Soldiers’ Eyes: British Army Life 1939-45, Eyewitness Korea: The Experience of British and American Soldiers in the Korean War 1950-1953 and Eyewitness RAF: The Experience of War 1939-1945.