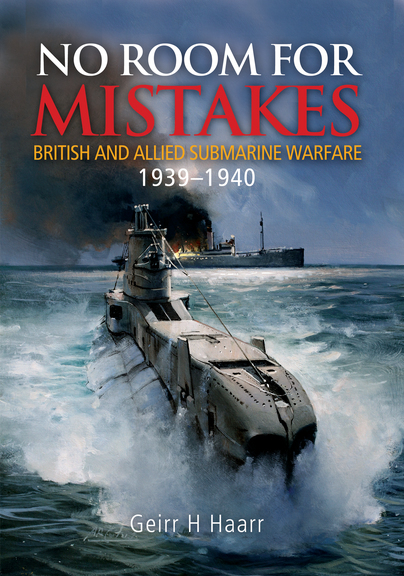 No Room for Mistakes (ePub)

Click here for help on how to download our eBooks
Add to Basket
Add to Wishlist
You'll be £14.00 closer to your next £10.00 credit when you purchase No Room for Mistakes. What's this?
Need a currency converter? Check XE.com for live rates

A new book from this bestselling author covering the events at sea in the early years of World War II, in which he has compiled comprehensive research and insight into a highly readable and detailed account of British and Allied submarine warfare in north European waters at the beginning of the war.
The early chapters describe prewar submarine development, including technical advances and limitations, weapons, tactical use and life onboard, and examine the men who crewed them and explore their understanding of the warfare that they would become involved in.
The core of the book is an account of the events as they unfolded in 'home waters' from the outset of war to the end of 1940, by which time the majority of the Allied submarines were operating in the Mediterranean. It is a story of success, triumph, failure and tragedy, and it tells of the tremendous courage and endurance shown by a small group of men learning how to fight a new kind of war in claustrophobic, sub-sea vessels with limited information about the enemy, or what they would meet off the alien coasts to which they were heading. Extensive primary sources are used to document the many aspects of this war, some of which remain controversial to this day.
Max Horton, Vice Admiral Submarines 1940, said: 'There is no room for mistakes in submarines. You are either alive or dead.' This book makes plain how right he was.

Fantastic book that covers the prewar development and actions of the British submarine arm, also including the actions of the Allied submarines (Polish, Dutch etc), in the early days of WW-2. A large part of the book concentrates on the Norwegian campaign in 1940 but there is still plenty of details of operations before and after that period. Very well researched and excellently written.

No Room for Mistakes is a meticulously researched and well-written history of the British and Allied submarine services from 1939 to 1940. The relatively short time span the book covers allows the author, Geirr Haarr, to delve into granular detail, often giving week by- week, even day-by-day, accounts of particular submarines and their travails fighting the German navy in the eastern Atlantic and Mediterranean.

My favorite aspect of No Room for Mistakes is Haarr's extensive use of primary sources, including diaries, logs, journals, and photographs. These materials help make the historical account of this period much more poignant and remind the reader of the high human cost of war at sea. No Room for Mistakes is an excellent addition to a personal library and is recommended particularly to anyone with an interest in naval history.

The author takes a fascinating look at submarine versus submarine warfare, and he returns to his earlier work to discuss the submarine service during and after the German invasion of Norway and Denmark, when submarines were used for special missions such as landing agents or Commando units.

This is an excellent history of one of the most dangerous branches to serve in during the Second World War, with losses only equalled on the British side by Bomber Command.

The author - a Norwegian Naval History preparatory that already has some valuable work dedicated to naval operations in the North-European seas - is this time involved in a detailed description of the activity in the same waters of the British and allied submarines in
1939-1940.

With his engrossing style and complete master of detail Geirr H Haarr provides a very full and extremely readable account of the submarine campaign.

Covering the events at sea in the early years of World War II, this is a detailed account of British and Allied submarine warfare in north European waters at the beginning of the war.

Bestselling author Geirr H Haarr has here written the definitive account of British and Allied submarine warfare in north European waters at the beginning of the Second World War. Extensive primary sources are used to document the many aspects of this war, some of which remain controversial to this day.

This is the story of a submarine war between the Allies and the Axis in the seas of Norway, North, Baltic and more widely in the Atlantic Ocean. The history of the Polish submariners, French, Dutch, Belgian, British against the Germans is narrated by H. Geirr Haarr...

Geirr Haarr’s previous books described the three phases of the German invasion of Norway in 1940 and all were critically well-reviewed. No Room for Mistakes describes Allied submarine operations in Northern Europe from September 1939 to the end of 1940. It focuses primarily on the Royal Navy but includes the operations of Polish, French, Dutch and Norwegian boats under British control.

As in his earlier books, Haarr demonstrates the rare ability to assimilate previously unpublished photographs which he uses to complement the text perfectly together with a sequence of well-drawn maps. His research into a variety of archives has enabled him to describe the actions of individual commanding officers together with the influence their doctrinal and training backgrounds had on them as well as the deployments of submarines on war patrols under difficult and unexpected conditions. The differing concepts of how best to use submarines are also covered extremely well. Overall, the text has both human and historical interest which will appeal to a wide readership.

The title is taken from a quotation by Vice Admiral Max Horton ‘There is no room for mistakes in submarines, you are either alive or dead’ and the book follows a logical sequence describing the various types of submarine, their weapons, equipment and the men who manned them with comment on pre-war doctrine and training before describing their use in operations.

Haarr takes as his starting point the incident he refers to as an ‘unlucky accident’, the sinking of Thetis in 1939 while on her builder’s trials, noting the shortcomings that resulted in a failure to rescue most of those on board despite her stern being above water for some hours. She was subsequently raised, refitted and renamed Thunderbolt and Haarr ends his narrative with the observation that her eventual, successful operations symbolised ‘the conversion of the British Submarine Service from a poorly understood strategically and tactically misused part of the Royal Navy to a versatile weapon of choice’.

Between these extremities he explains how submarines were thought of at first as adjuncts to surface fleet operations with a number of restrictions placed on them until the arrival of Max Horton as Vice Admiral (Submarines) and the German invasion of Norway, two factors which led to more effective tasking. The description of the RN Submarine Service’s rapid evolution under the harsh reality of operational patrols in waters dominated by the enemy and its relationship with Allies makes fascinating reading for anyone concerned with contemporary submarine operations and those with an interest in naval history.

Many writers have tended to view conflict from the perspective of known outcomes. Haarr ‘peels back’ that knowledge and explains, step by step, how the use of submarines evolved under the harshest of conditions. No Room for Mistakes is an important book that takes a fresh look at a fascinating aspect of naval warfare and I thoroughly recommend it.