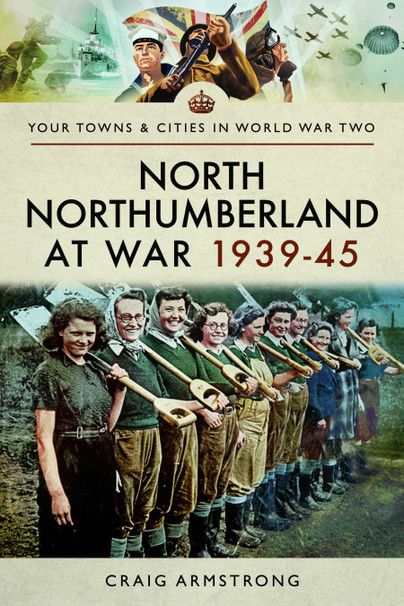 Click here for help on how to download our eBooks
Add to Basket
Add to Wishlist
You'll be £4.99 closer to your next £10.00 credit when you purchase North Northumberland at War 1939 - 1945. What's this?
Need a currency converter? Check XE.com for live rates

In 1939, North Northumberland shared a proud tradition of military service with it’s wider region and this was reflected in the huge numbers of men and women from the area who came forward for service in the military or in roles such as the Home Guard, ARP services or nursing.

This part of Northumberland was a key recruitment centre for the local county regiment, the Royal Northumberland Fusiliers, with men from the area being heavily involved in the fighting during the blitzkrieg of France and the Low Countries, the miracle of Dunkirk, as well as many more battles. Yet, to the dismay of many, an entire territorial battalion was taken prisoner at Singapore.

This district was also vital as a training area, with the wide and relatively uncluttered skies being widely used for the training of aircrew, one airfield played a key role in the build up to D-Day.

In addition to combat and training, this area was also rich with fertile land and so played a crucial role in the war effort as it supplied food to its own communities and wider Britain.

Many communities in the area welcomed evacuees from urban Tyneside whilst also welcoming servicemen (especially from the RAF) into their homes. Others saw the business opportunities and this book includes accounts of the struggle that many families faced in coping with rising wartime prices, longer working hours and endless worry.

Despite the hardships the people of North Northumberland undertook, they all bundled together, and continued to provide incredible charitable support right up until the end of the war in addition to their normal efforts.

They managed to maintain their morale throughout the majority of the war despite rationing, blackout and wartime restrictions.