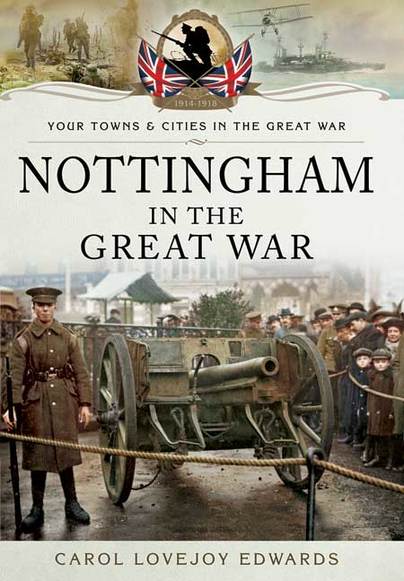 Nottingham in the Great War (ePub)

Click here for help on how to download our eBooks
Add to Basket
Add to Wishlist
You'll be £4.99 closer to your next £10.00 credit when you purchase Nottingham in the Great War. What's this?
Need a currency converter? Check XE.com for live rates

The years 1914-1918 cost many lives in the trenches of France and Belgium. Those trenches and the battles that were fought from them are well documented. But back home in towns and cities up and down the United Kingdom death and desperation were also apparent. Those left behind to carry on suffered from harsh winters, lack of food and fuel and flu epidemics. This is the story of the struggles of ordinary people with their everyday lives. It includes the opportunities presented to the criminal fraternity and the contribution that women made to the war effort by filling men's jobs and providing a home for the men to return to. If they were lucky enough to come home from the war.

Part of the excellent 'Your Towns & Cities in the Great War' series, this volume takes a detailed look at the largely unexplored history of the city. It tells the story of the ordinary people trying to continue their everyday lives in the face of terrible losses, how they coped and even excelled, the contribution made to the war effort by women who filled men's jobs, the children who sacrificed their education to work on the land, and of the opportunities provided to the local criminal fraternity.

'... the author weaves fascinating tales of the war from a different perspective, culminating in victory and peace.'