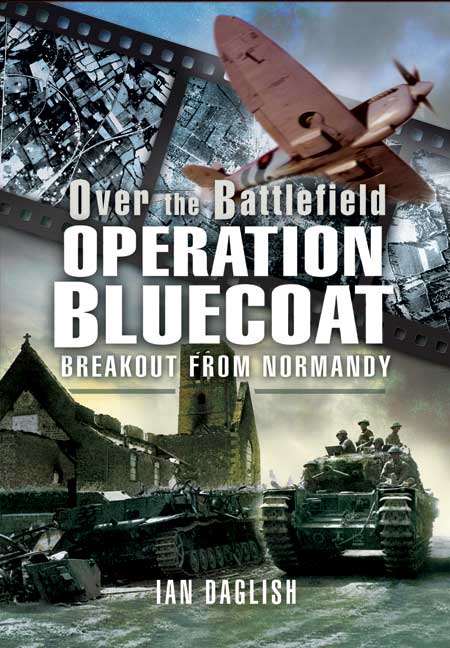 Click here for help on how to download our eBooks
Add to Basket
Add to Wishlist
You'll be £4.99 closer to your next £10.00 credit when you purchase Operation Bluecoat-Over the Battlefield. What's this?
Need a currency converter? Check XE.com for live rates

The main narrative of this book will span the initial break-in from Caumont on 30 July, through the armoured battles of the following days, to the desperate German counter-attacks of 4 – 6 August, the no less desperate German defence of Estry up to the middle of the month, and the final withdrawal from Normandy.

The book also examines Monty's refusal to seize Vire, the disputed Anglo-American border and the Operation's impact on the German Mortain offensive.

Operation Bluecoat is perhaps one of the least well known offensives of the Battle for Normandy, and has often been overshadowed by its earlier cousins Epson and Goodwood. This is largely due to the myth that Monty failed in Normandy, and that the US Army had to bail out the British (an argument made principally by Carlo D'Este). This argument takes no account of the fact that Goodwood and Epsom, whilst not making a decisive breakout, ground down the German forces in Normandy to such an extent that a breakout further west was made possible. The myth that British forces in Normandy because bogged down and had to be rescued by the American breakout that still pervades in many quarters. It is an argument that promises to rumble on for years to come.

Whatever the argument, it is clear that Bluecoat has been somewhat overlooked. The British advance to seize Mont Pincon and the key road junction at Vire led to the encirclement of German forces in the Falaise Pocket. If the northern boundary of the Falaise pocket had not been formed, then more German forces would have escaped to fight another day. Hopefully this book by Ian Daglish will play a part in helping redress the balance. I have found it very enjoyable, readable and most informative.

The Over the Battlefield series is an innovative concept, drawing on aerial recconaissance photographs taken during the battle complemented with contemporary photographs. Given the popularity of GoogleEarth the use of overhead views is most welcome. Especially with a complex battlefield such as that found in Normandy, Over the Battlefield helps the reader to 'smell the battlefield'. I for one hope that there are plenty more books to come in this vein - an edition of the Battle of Arnhem would be fascinating.

The breakout battles from the Normandy beachhead are attracting an increasing level of interest. This is a comprehensive guide to the British attempt to smash through some of Hitler's finest panzer troops. It is packed with maps, aerial photographs and first-hand accounts that bring the battles of July and August 1944 to life. I found this to be a very well written dual-purpose book - it can be used both as a guidebook and a written history. An ideal starting point if you want to go out and rered the tank tracks of the battle.

'This is a very impressive piece of work in many ways - the combination of this of detail and a readable and lucid account is very rare, helped by the use of a massive amount of detailed small-scale maps, many with extra details added to illustrate key incidents...This book will be of great value to any historian or researcher studying the Normandy campaign, Second World War combat, or the nature of armoured warfare in general.'