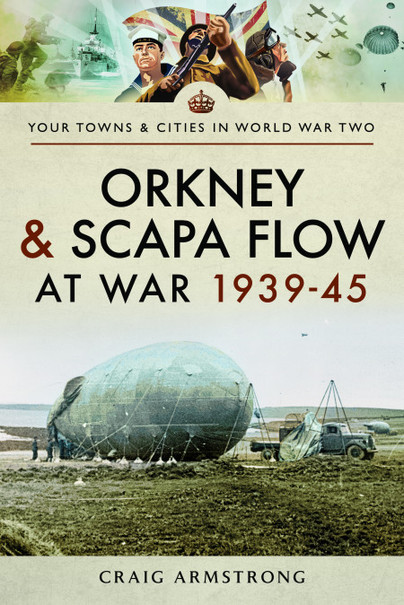 Click here for help on how to download our eBooks
Add to Basket
Add to Wishlist
You'll be £6.98 closer to your next £10.00 credit when you purchase Orkney and Scapa Flow at War 1939–45. What's this?
Need a currency converter? Check XE.com for live rates

Orkney was a key strategic location during the Second World War. The vast anchorage of Scapa Flow was the main haven for the Royal Navy’s Home Fleet, which would be expected to both protect the sea lanes around Britain and to engage any German naval units within their area of operation. As such, the war was very real to Orcadians from the outset. The naval base, and by extension the islands, was a prime target for the Luftwaffe and attempts to bomb the anchorage were made from the beginning of the war.

In the early hours of 14 October 1940, a German submarine apparently penetrated Scapa Flow’s defences and managed to sink the ageing battleship HMS Royal Oak with the loss of 834 of her crew, including many boy sailors. The loss shocked both Orkney and wider Britain and was a huge propaganda coup for Nazi Germany at this early stage in the war. The loss of the Royal Oak spurred changes to the defences of Scapa Flow, which hugely impacted Orkney.

Orcadians also made a huge contribution to the war effort through farming and in providing support to the thousands of sailors, soldiers and airmen who were based locally. Orcadians also raised considerable funds and gathered much-needed items, including scrap metal and even sphagnum moss for use in the treatment of wounds. Large numbers of Orcadians worked in the fishing industry and this was a staple supplier of food for the islands, as well as a key employer. The men aboard the trawlers were used to danger, but the war ramped this up even further as many became prey to German attacks from the air.

Although isolated from the mainland, the people of Orkney made a very substantial contribution to the war effort and many paid the ultimate price, losing their lives in the service of their country.

Sometimes one forgets the parts played in the Second World War by the outlying islands of Britain. Craig Armstrong reminds us of the courage and immense sacrifices made by Orcadians, and tells of the efforts made by the British to protect their remote islanders. Superb addition to a remarkable series.

If you are interested in this part of Scotland, and the impact which war had on these islands, then this book is an essential purchase.

Overall, an interesting read, lots of familiar names and places mentioned.
The book is well illustrated with contemporary photos and copies of adverts placed in local papers to match the text.

Would I recommend you buy your local one. If you have degree of interest in local history, then yes.

The resilience of the inhabitants of Orkney, combined with their sacrifice in terms of social life, rationing, danger of invasion is undoubted and emerges from the text by Craig Armstrong, another beautiful volume for the series "Your Town & Cities in World War Two".

All my regular readers will know that I love the Towns & Cities of World War Two series, and this book is no difference written by a regular writer for this series and Pen & Sword Books. In that it’s another excellent book written from a local point of view, where it looks at the local people, organisations, rules and how the effects of the war affect the locality. A CPL in the WAAF Georgina Mason is mentioned in the last chapter but it says that there is no mention of her death in local papers, I just wondered on this point whether she had been part of something secret as you often found people who died doing something covert or secret never got the mention they deserved for obvious reasons. Another great book, very well written and the blend of local news, photographs, pictures is excellent and very balanced. A recommended book.

As with other volumes in the Your Towns & Cities in World War Two series it speaks to the experience of local people who found themselves buffeted by a conflict which would leave its mark on everyone who lived through one of the most challenging periods in Britain’s history. The people of the Orkney Islands were not unique in what they went through during the Second World War but the remoteness of their communities and the scale of the naval operations around them did perhaps amplify the impact on their lives.