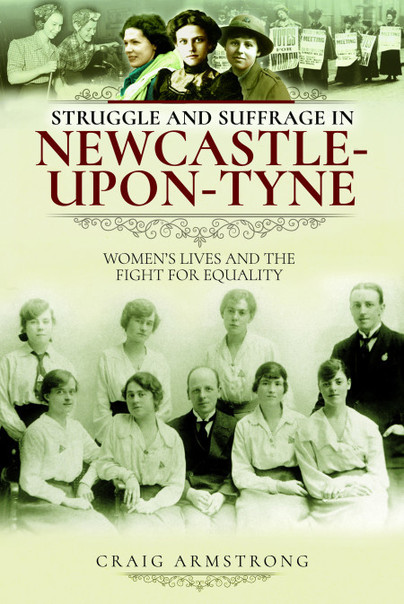 Struggle and Suffrage in Newcastle-upon-Tyne (Paperback)

Preorder
Add to Wishlist
You'll be £10.39 closer to your next £10.00 credit when you purchase Struggle and Suffrage in Newcastle-upon-Tyne. What's this?
+£4.50 UK Delivery or free UK delivery if order is over £35
(click here for international delivery rates)

For much of the nineteenth century, the women of Newcastle had occupied crucial, though largely underappreciated and acknowledged, roles within society. Aside from the hard life of raising families in an area where money was often hard to come by, and where much of the available work was labour intensive and dangerous, women were also expected to play a role in bringing money into the household.

The use of female labour in Newcastle was often criticised by visitors to the town, particularly with the use of women on building sites. It was believed that many of the roles undertaken by women had a poor effect on their character, but it also created a unique and colourful variety of local personalities, some of whom were celebrated in song and story.

The period was also one of considerable upheaval. Women were increasingly demanding greater rights and freedoms and Newcastle became a hotbed of support for the suffragist movement. Indeed, a number of prominent Tyneside suffragists and radical suffragettes launched several attacks in the area. The Chancellor was attacked while on a visit to Newcastle to make a political speech, and a number of suffragettes were arrested for damaging properties and for attempting to throw things at him. On another occasion, a bowling clubhouse was burned to the ground in an arson attack made by local, though unidentified, suffragettes.

Women had also been excluded from many of the vital industries on Tyneside. Shipbuilding, heavy engineering, mining, women were excluded from all of these male bastions and there was a prevailing attitude amongst many Newcastle men that women should be kept out of industry as much as possible. The two World Wars changed this, when the rush of men to the colours resulted in these vital industries having to employ ever larger numbers of women and to acknowledge their contributions.