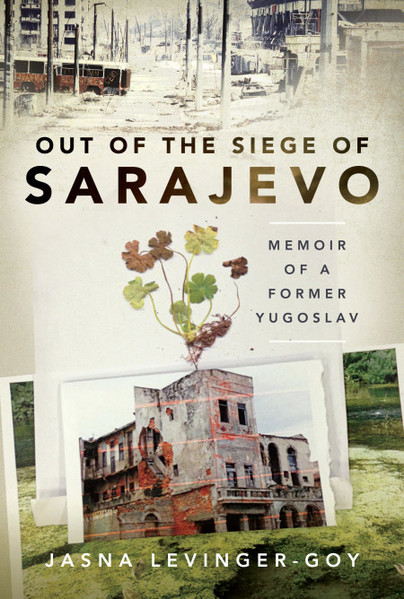 Out of the Siege of Sarajevo (ePub)

Memoirs of a Former Yugoslav

Click here for help on how to download our eBooks
Add to Basket
Add to Wishlist
You'll be £1.99 closer to your next £10.00 credit when you purchase Out of the Siege of Sarajevo. What's this?
Need a currency converter? Check XE.com for live rates

The horrors of the civil war in Bosnia and Herzegovina, in the very heart of Europe in 1992, may be all but forgotten – but not by everyone. In this book, Jasna Levinger-Goy offers a vivid, personal story of a family of Jewish origin who identified as Yugoslavs. It traces their journey over a period of ten years, starting with their life in Sarajevo under siege and ending in the United Kingdom.

Without belonging to any of the warring factions, this is Levinger-Goy's true story, a story that takes place on the front lines in the heart of Sarajevo. The book offers a percipient view of the civil war through the eyes of those who witnessed it. We are presented here with the motives, reactions and behaviour of people caught in the crossfire of political and military events outside their control. It illustrates coping with dangers and the resourcefulness needed during the siege and during the perilous journey out. It also shows that almost the equal amount of coping mechanism and resourcefulness was required in adapting to new circumstances as well as in building a new life.

Levinger-Goy’s venture into the unknown is tangled with the sense of loss – of home, of a country and the loss of identity. Her experience provides an insightful commentary on how these intersect, overlap and ultimately affect an individual. It sheds light on human suffering and resilience, frailty and ingenuity, cruelty and empathy. It describes unique personal circumstances, but illustrates universal behaviours. Although the book inevitably deals with fear, pain, desperation, loss, and even hatred, it also reveals much about love, hope and happiness and above all about the prevalence of good even in the most difficult of circumstances.

Set against the backdrop of a brutal conflict, this book reminds us of the very human cost of war.

This book offers a raw and honest account of the experience of being caught up in the ravages of brutal hostilities that took place in the centre of modern day Europe. Jasna Levinger-Goy bravely recounts her experiences of her life as a ‘Yugoslavian’ caught up in the Bosnia and Herzegovina civil war, between 1992 and 1995. The author skillfully captures in words her reslience, defiance, despair and will to navigate not only her own survival but that of her terminally ill father and her aging mother, as the civil society she has always known breaks down around her. The book not only gives the reader insight into what people have to endure to survive when war comes to their door, but it is also an exploration of identity and why it is so important to us as human beings. The author laments the loss of her Yugoslavian identity which can never be recovered, but through her experiences of survival she discovers and connects to her dormant Jewish identity. The book is a rush of pain, anguish, anxiety, fear, loss, love, introspection and renewal. This is a piece of European history that must not be forgotten and we owe sincere thanks to the author for bringing it to us with such clarity. This is an important book and a gem of a read.

Debra Brunner; Co-founder and CEO - The Together Plan, UK Charity

JASNA LEVINGER-GOY was born in Sarajevo, former Yugoslavia. She has a BA in English Language and Literature from Sarajevo University, an MA in Linguistics from Georgetown University, Washington DC, and a PhD, also in Linguistics, from Zagreb University. In the former Yugoslavia she was a university lecturer at Sarajevo University and later at Novi Sad University. In the UK she was a lector in Serbo-Croat at SSEES, University College London and a tutor in interpreting at London Metropolitan University. She has published a number of articles and translations both in Serbo-Croat and in English. While in Sarajevo she translated Emily Dickinson’s poetry in cooperation with Marko Vešović, published by Svjetlost Sarajevo in 1989 and by OKF Cetinje in 2014.

She moved to the UK during the Bosnian civil war and married Edward Dennis Goy, a Cambridge University Slavist. They worked together on various translations, including translations into English of the Yugoslav novels, The Fortress by Meša Selimović and The Banquet in Blitva by Miroslav Krleža. In the early 2000s she qualified as an integral psychotherapist and has her own practice in Cambridge.