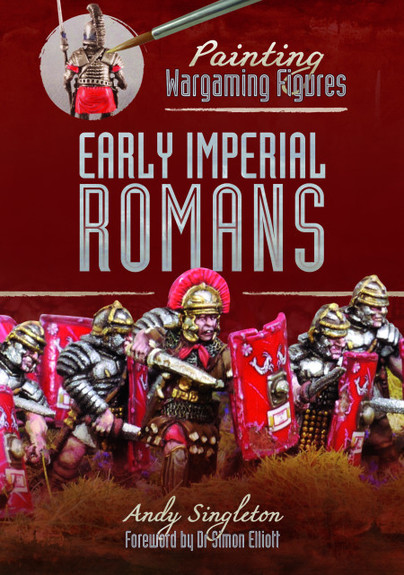 Add to Basket
You'll be £5.82 closer to your next £10.00 credit when you purchase Painting Wargaming Figures – Early Imperial Romans. What's this?
Need a currency converter? Check XE.com for live rates

Andy Singleton has been modelling and painting most of his life and has been a professional commission figure painter for some years now. Here he shares his experience and tips of the trade with those collecting Early Imperial Romans. The emphasis is on achievable results and practical advice that is applicable to painting units or whole armies for wargaming purposes in a reasonable time frame, not on spectacular individual display pieces. Most of the figures featured in the numerous illustrations are either 28 or 25mm but the techniques described are easily adaptable to smaller sizes and both plastic and metal figures are covered. Andy’s clear, step-by-step guidance takes the reader through the process from the initial preparation and assembly of the figure, to finishing and basing. Themed chapters cover armour, weapons and equipment, clothing, skin tones, shields and horses. All together it contains all the help you need to recreate your own legions of this most iconic army of ancient history.

There is a wealth of information in there for the novice painter and some nice inspiration for the more experienced as well.

Once again Andy Singleton, with an extremely interesting volume, shows us how to make our miniatures realistic, portraying a period that has several producers with an infinite number of miniatures on the market. Another excellent book to improve the skills of model makers and wargamers.

Andy Singleton has produced a book that I will use often when painting my wee soldiers, though I have little hope I will ever reach his standards – I can try though!

The book is then rounded off by considering how you base your completed figures, and again with a good variety of different ground types. To close, there is a handy Appendix which lists the various manufacturers as well as details of all the figures and materials featured in the book.
Another excellent addition to the series, and as someone who has only recently got into building 'Ancient' figures (rather than Napoleonic or WW2) I found this a really handy and informative guide.

Another excellent guide by Andy Singleton that helps those of us committed to creating cohorts of 28mm Romans. It offers detailed instructions on paint choices and application methods plus many tips on getting my cohort to look right. Time will tell, but if they come up short it will not be down to the advice in this book! A must for any cohort creators.