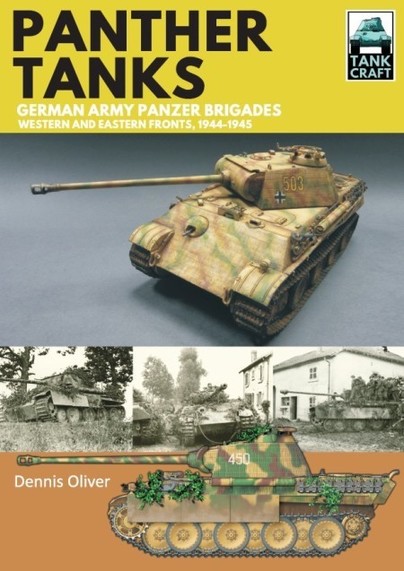 Add to Basket
Add to Wishlist
You'll be £16.99 closer to your next £10.00 credit when you purchase Tank Craft 24: Panther Tanks: Germany Army Panzer Brigades. What's this?
+£4.50 UK Delivery or free UK delivery if order is over £35
(click here for international delivery rates)

In July 1944, with the Eastern Front crumbling and the first cracks appearing in the Normandy defences, Hitler ordered the creation of a new type of unit based on the ad-hoc Kampfgruppen which the Germans used so successfully throughout the war. Hastily assembled and short-lived these independent Panzer brigades nevertheless served on both fronts in some of the fiercest fighting of the conflict. The real striking power of the initial units would a battalion equipped with the Pzkpfw V Panther, perhaps the most effective armoured vehicle produced by Germany during the Second World War. In Dennis Oliver's latest volume in the TankCraft series he uses archive photos and extensively researched colour illustrations to examine the Panther battalions of the Panzer brigades that fought to hold back the Allied advance during the last months of 1944. A key section of his book displays available model kits and aftermarket products, complemented by a gallery of beautifully constructed and painted models in various scales. Technical details as well as modifications introduced during production and in the field are also examined providing everything the modeller needs to recreate an accurate representation of these historic tanks.

Another fine addition to the TankCraft series, and with additional material to earlier books in the series which also feature the Panther. Interesting material for any WW2 armour history enthusiast but also lots of information and inspiration for modellers.

My modeling days are long gone, but a book like this offers inspiration and taunts my oft-glued together fingers to pick up the hobby anew.

These books where you have a mixture of history, camouflage and models are becoming more and more the norm. This one is well done, as are the other books in the series as they are by the same author. I've grown to look forward to each one as they come out.

This is one neat book on the Panther tank.

Once again, the "TankCraft" Series, of which the volume presented is n ° 24, hits the mark by dealing with a known and "mythologized" vehicle (perhaps not like its older brother, the Tiger tank) and making it available to the history buff and modeller, news, photos, data and diagrams that will be extremely useful.

Another excellent addition to the TankCraft series of books, aimed primarily at modellers, but applicable to an even wider readership. The Panther was developed as the answer to the Soviet T-34 and was a major advance in tank design – Very Highly Recommended

Dennis Oliver has written many of the “Tank Craft” books and his meticulously researched text is well supported by numerous black and white archive photographs. I have reviewed many books in this series and this is one of the best. The emphasis in this book is on the ad-hoc Brigades, rather than the Panther tank, which will doubtless appeal to the military historian. But there is much here for the military modeller and as the Panther is an iconic tank there can be no doubt this book will prove popular. Highly recommended to model makers and historians interested in German AFVs used in the latter stage of World War II.

The colour profiles are terrific, as ever. And the quality of the showcase models is jaw-dropping.