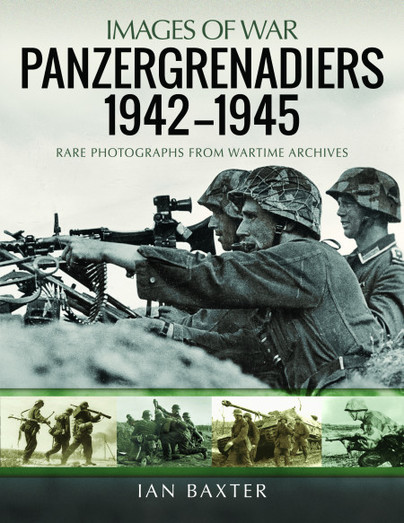 The term Panzergrenadier came into being in 1942 to describe motorised infantry units operating in direct conjunction with the panzer divisions. Excellently trained and equipped, these fast-moving formations provided powerful support to their armoured counterparts, and were an essential means of maintaining the momentum of an advance. As would be expected of the Images of War series, this book contains a great wealth of rare and excellent quality photographs, many of which have not been published before, complete with detailed explanatory notes. They show Panzergrenadiers of many different units operating in numerous theatres but largely on the Eastern Front, in a variety of situations and clearly displaying an array of their personal equipment and arms, as well as their heavier equipment including armoured vehicles, on which they are frequently mounted.

"Ian Baxter has, again, done an incredible job of assembling pictures that you won’t see in any other book."

"These pictures are a real boon for modelers looking for ideas on weathering, storage and settings..."

The photographs are an invaluable source for anyone interested in these hard-fighting, battle-tested troops, and modellers and wargamers will find plenty of inspirational material.

"Lots of photos show panzergrenadiers hitching a ride on tanks, leaping off of half-tracks, and digging in. Plenty of diorama inspiration coupled with considerable field uniform details."

The Panzer grenadiers having been spread across both the army and air force, are a group of infantry that the armour modeller will find of particular interest. The many and varied images of these soldiers that are presented naturally in these photographs make this a particularly appealing title, which is further enhanced by well written captions.

"It all makes for an excellent photo reference with enough historical content to whet one's desire to learn more about specific units and campaigns."

The Latest in P&S's Images of War series looks at "Panzergrenadiers", a term coined halfway through the war. Soon after that, they were inretreat on all fronts and having a very hard time of it, all captured in a series of stunning photographs, here published for the very first time.

Overall, this book is an excellent collage of photos of these brave troops and the author has produced a remarkably interesting volume. There are many details which the photos highlight such as personal equipment and weapons, vehicles, the terrain traversed by the Panzergrenadiers and action shots of combat. It is an exceptionally good book, and the mainstay is of course its imagery. Anyone interested in photographs of the German Army in World War 2 would find this volume exceptionally good value and informative.

The selection of archive images is of course the heart of the book, and it has a good balance of clear images of the men in these units, and their equipment. A few photos will be familiar to many, but most I had not seen before. An interesting mix among the images, especially in Russia, from the hot summer on the Steppe, to the deep snow, mud and winter white uniforms and vehicle camouflage. Among them are 2 or 3 showing the rare Ausf A version of the Sdkfz 251, with the extra vision blocks down the sides of the crew compartment, not seen on later versions. There are also a lot that show a number of AFVs carrying a large number of Tank Riders, which should offer lots of ideas for modellers especially. Another good addition to the series from Ian Baxter.

The photos are of the usual high quality and actually it’s nice to see ‘normal’ black and white photos rather than the fashion for colourized photos. Maybe an undermined group of men, it was interesting to read about them, when and where they tended to utilize and what they were having to work with regarding vehicles and weapons. A thoroughly good book, well written and presented with the text supporting the images well indeed. An excellent book for fans of German troops.