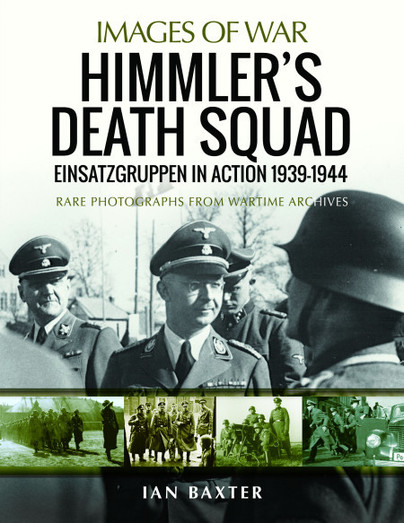 The murderous activities of Himmler’s Einsatzgruppen – or death squads – rank high among the horrors of the Nazi regime during the Second World War. These hand-picked groups followed in the wake of Waffen-SS and Wehrmacht units advancing intro Eastern Europe and Soviet Russia.

Their mass murder of civilians in the occupied territories will never be accurately quantified but is likely to have exceeded two million people, including some 1.3 million of the 6,000,00 Jews who perished in the Holocaust.

The graphic and shocking photographs in this Images of War book not only show the hunt for and rounding up of civilians, communists, Jews and Romani people but the active support given to the Einsatzgruppen by SS units and Wehrmacht units. The latter strenuously denied any collusion but the photographic evidence here refutes this.

Looking through its contents, makes the viewer confront some of the evil acts committed in the name of a greater Germany under Hitler and the National Socialist Party. The barbarity shown will leave you under no illusion as to why WWII needed to be fought, and how different it may have been if the Axis powers had won.

Himmler’s Death Squad by Ian Baxter – Einsatzgruppen in Action, 1939–1944 contains rare photographs from wartime archives. This is a photograph-based book, very much like another book by him that I reviewed recently on Concentration Camp Overseers. This book is filled with horrifying images, but it offers such a fantastic collection to better understand what happened during the ethnic cleansing. Not only Jews were murdered, but also Romani, communists, gays, and people with any disabilities.

Himmler’s Einsatzgruppen were death squads and these 4 groups were sent into Eastern Europe and Soviet Russia to help with the so-called Jewish problem. The members of the groups were carefully selected. It is assumed that they were responsible for killing around 2 million people, including 1.3 million Jews.

The photographs are graphic, but this is history, this is what happened, so knowing about them is incredibly important. In one of the pictures 18 SS-men are executing 6 civilians. I looked at that picture closely because it is wasteful to use 18 people to eliminate 6. Why did they do that? The only answer is because no one of them wanted to be sure that they killed another man. It could have become too personal. In another picture the victims are with their faces to the wall, at a long distance from the executioners and the executioners are kept in pairs. Again, this is wasteful and it must be the same reason, to diminish each person’s responsibility. Did this show that they were not 100% convinced by what they had to do, maybe they felt that those Jews they were killing were not sub-humans as the propaganda suggested but in fact they were fellow beings just like them? If not, why go to all this trouble? Why did the commanders felt the need to do that? Reading about these things can create a distorted image and seeing a picture like these two shows that what really happened is in fact much more complicated, more nuanced.

This is why I highly recommend this book and why I gave it 5 stars. It’s heartbreaking to see all those victims being executed and/or humiliated. It shows men, elderly, women, children and it also shows the SS and other locally recruited men in their nice uniforms, in a very stark contrast.