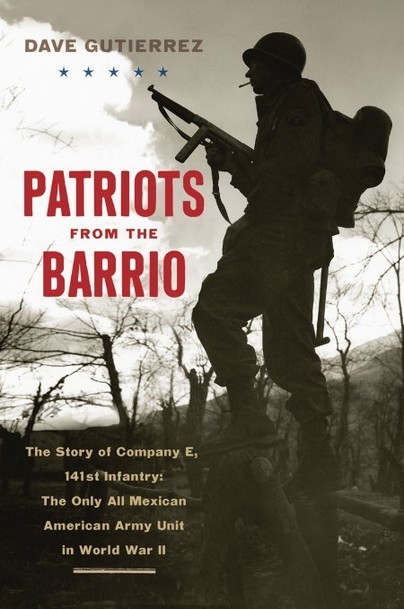 Patriots from the Barrio (Hardback)

The Story of Company E, 141st Infantry: The Only All Mexican American Army Unit in World War II

Add to Basket
Add to Wishlist
You'll be £25.00 closer to your next £10.00 credit when you purchase Patriots from the Barrio. What's this?
+£4.50 UK Delivery or free UK delivery if order is over £35
(click here for international delivery rates)

As a child, Dave Gutierrez hung on every word his father recalled about his cousin Ramon, “El Sancudo” (the mosquito), and his service in World War II, where he earned a Silver Star, three Purple Hearts, and escaped from the Germans twice. Later, Dave decided to find out more about his father’s cousin, and in the course of his research he discovered that Ramon Gutierrez was a member of Company E, 141st Infantry, a part of the 36th “Texas” Division that was comprised entirely of Mexican Americans—the only such unit in the entire U.S. Army. The division landed at Salerno, Italy, in 1943, among first American soldiers to set foot in Europe. In the ensuing months, Company E and the rest of the 36th would battle their way up the mountainous Italian peninsula against some of Nazi Germany’s best troops. In addition to the merciless rain, mud, and jagged peaks, swift cold rivers crisscrossed the region, including the Rapido, where Company E would face its greatest challenge. In an infamous episode, the 36th Division was ordered to cross the Rapido despite reports that the opposite bank was heavily defended. In the ensuing debacle, the division was ripped apart, and Company E sustained appalling casualties. The company rebounded and made the storied landings at Anzio and ultimately invaded southern France for a final push into Germany. The men of Company E distinguished themselves as rugged fighters capable of warring amid the rubble of destroyed villages and in the devastated countryside.

Based on extensive archival research and veteran and family accounts, Patriots from the Barrio: The Story of Company E, 141st Infantry: The Only All Mexican American Army Unit in World War II brings to life the soldiers whose service should never have gone unrecognized for so long. With its memorable personalities, stories of hope and immigration, and riveting battle scenes, this beautifully written book is a testament to the shared beliefs of all who have fought for the ideals of the American flag.

DAVE GUTIERREZ is a professional researcher, historical presenter, and writer. His articles have appeared in publications including American Legion and War History Online. Recognized by both the Texas Military Forces Museum in Austin and the El Paso Museum of History for his ground-breaking work on Company E, he also specializes in genealogical research, Mexican American history, and World War II studies. Dave and his family reside in San Jose, California.

Other titles in Westholme...
New Release