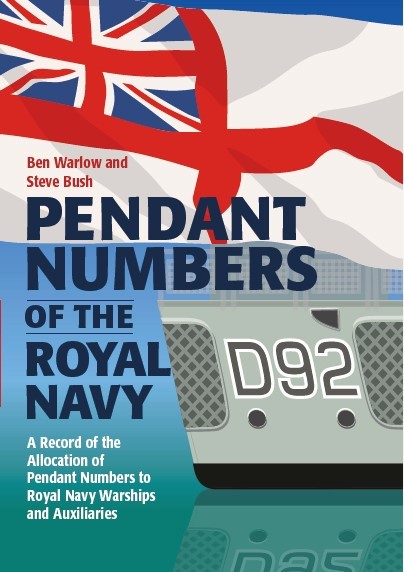 Add to Basket
Add to Wishlist
You'll be £25.00 closer to your next £10.00 credit when you purchase Pendant Numbers of the Royal Navy. What's this?
+£4.50 UK Delivery or free UK delivery if order is over £35
(click here for international delivery rates)


This is an excellent reference book and partner to two of the Authors "Ships of the Royal Navy." book.

A complete history of pendant numbers cross referenced to Royal Navy ships of all shapes and seizes, from Aircraft Carriers to X Craft Submarines.

It has been indexed in a very comprehensive way and has some excellent black and white Ship's photos.

I give it full marks and recommend it to any Royal Navy historians.

The concept is so simple that I'm surprised this hasn't been done before. Maybe it has. Those numbers on the side of ships mean something, and this book tells you what they mean. This will be essential reading and will probably become highly collectable in future. There are few books for which the term 'indispensable' can honestly be used. This is one of those.

The fifth edition of this standard reference work contains updated information. The authors have included significant new information on the British Pacific Fleet in WWII – Most Highly Recommended

Authors Ben and Steve have compiled a significant list of Royal Navy pendant numbers which will be invaluable to maritime historians and the like. Painstaking work.

If you need to identify a warship via its Pendant Number, then this book is essential as it must be the best reference work on this subject. Many hours
must have been spent by the authors collating these numbers and tabulating their usage. It is an exceptional piece of work, and the two authors need to be commended.