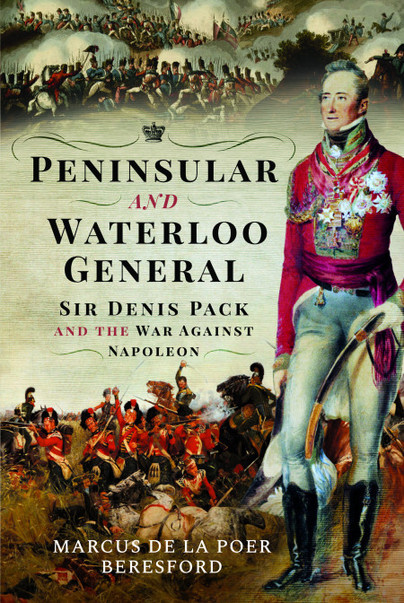 Sir Denis Pack and the War against Napoleon

Add to Basket
Add to Wishlist
You'll be £18.75 closer to your next £10.00 credit when you purchase Peninsular and Waterloo General. What's this?
+£4.50 UK Delivery or free UK delivery if order is over £40
(click here for international delivery rates)

Denis Pack was one of a phalanx of senior Anglo-Irish officers who served with great distinction in the British army in the French Revolutionary and Napoleonic wars, earning a reputation as one of the Duke of Wellington’s most able brigade commanders. Despite his remarkable and varied military career, he hasn’t received the individual attention he deserves, but this omission has now been remedied by Marcus de la Poer Beresford’s full biography.

Pack, who was born in 1774, served extensively in Europe as well as in Africa and South America. He was one of the few brigade commanders to serve first with the Portuguese army, and then with Wellington, in the Peninsula, at Quatre Bras, Waterloo and afterwards in the occupation of France. His life was cut short by an early death in 1823, which may have been the result of the many wounds he received in his thirty years as a soldier.

This perceptive and meticulously researched study draws on previously unpublished material from archives in the United Kingdom, Portugal and Ireland. It complements other works on notable officers of the period, as Pack served with Cornwallis, Baird, Beresford, Whitelocke, Chatham, Picton, Henry Clinton, and others as well as Wellington. In addition it offers an absorbing portrait of Pack himself and gives the reader a fascinating insight into the many campaigns he took part in and the military life of his day.

A well-researched and readable look at someone I had never heard of. Those with a casual interest in the Napoleonic wars, like me, might think Wellington single-handed won the day, and this is an interesting look at one of the many other generals who fought and led with distinction.

An excellent biography of a truly brave soldier, describing Pack's role in campaigns in Ireland, France, The Low Countries,Portugal, Spain, The Cape Colony and The Viceroyalty of The Rio De La Plata. It also gives a detailed account of the part Pack played in the Peninsular War and the battles at Quatre Bras and Waterloo. He his book is a compelling story of the life of a senior officer during a period marked by almost continuous warfare.

Recommended reading for any student of the Peninsular Wars and Waterloo and indeed for anyone I interested in military history. At the risk of repetition, an excellent book, worthy of full marks

Denis Pack, the son of an Irish clergyman and the daughter of Denis Sullivan, who had been a captain in the 28th Foot, was commissioned a cornet in the 14th Light Dragoons, aged sixteen, in 1791. He was court martialled less than two years later for striking another officer; it is not clear whether he was cashiered or merely suspended. He was, however, able to serve in the 14th LD again in 1794 as a gentleman volunteer and was promoted to lieutenant by purchase in 1795.

His subsequent thirty-year military career during the French Revolutionary and Napoleonic Wars saw him campaign in Flanders, Ireland, Cape Colony in south Africa, the Rio de la Plata in South America, Portugal, Spain, Walcheren, southern France and Belgium. He was wounded at least six and possibly nine times; suffered the Walcheren fever and was captured twice at Buenos Aires. He served throughout the Peninsular War and was present at all the major battles except Talavera, when he was at Walcheren, and in the Waterloo campaign.

In 1819 Pack was appointed Lieutenant Governor of Plymouth and general officer commanding the Western District but died after suffering a ruptured blood vessel on 23rd July 1823. His early death at the age of forty-eight may have prevented him writing his memoirs, and the author has been unable to locate his journal, referred to in a short account of his life by Peter Carew in Blackwood’s Magazine in 1946, so has had to rely upon the papers of others for details of Pack’s life and service.

An Irishman by birth, Pack made his name commanding the 71st Foot, a Scottish light infantry regiment, then entered the Portuguese service to gain command of a brigade in 1810. He commanded Portuguese troops for much of the Peninsular War before being given command of the Highland Brigade in 1813 and commanded a mixed Scottish and English brigade at Quatre Bras and Waterloo.

Sixteen colour plates, bound into the centre of the book, include several portraits of Pack at different stages of his career, photographs of his octagonal pistol, sword, travelling basin, Portuguese Peninsular War medal, his Peninsular and Waterloo medals and his monument in St. Canice’s Cathedral, Kilkenny. There are also portraits of Lady Elizabeth Pack, Marshal Beresford, the Duke of Wellington and Lieutenant Colonel Noel Hill, together with five contemporary prints, and plans of the battles of Salamanca, Orthez and Quatre Bras.

Eighteen maps of varying sizes, accompanying the appropriate parts of the text, show the campaigns, battles and sieges in which Pack participated.

Two appendices contain Wellington’s memorandum to Pack of 20th October 1812 and the inscription on his memorial.

Thirty-eight pages of endnotes, a seven-page bibliography and an index conclude the book.

A carefully researched and very readable biography of one of Wellington’s most able brigade commanders, of whom the Duke said, “no officer in the Service has been more zealous or more distinguished.” Sir Denis Pack deserves to be remembered and better known today. Wargamers who like to learn about the characters of the generals portrayed by the command figures in their tabletop battles will enjoy this book – and, having read it, will doubtless insist upon bonuses being awarded to any troops commanded by Pack in their recreations of battles!

This is a large well-researched book which contains material not previously published presented in an easy readable style. Also there are a number of sketch maps and a good set of relevant photographs.
A jolly good read which we highly recommend.

This is a concise and well written book, on a Napoleonic commander whose name ought to be familiar to any regular reader of the British aspects of Napoleonic history.

Most likely one will have heard his name, along with Kempt, because of the Waterloo campaign. Pack’s troops fought with distinction at both, being severely mauled at Quatre Bras, but thereby making the Allied cause at Waterloo itself more likely to succeed.

But his career took in the highs and lows of two decades of war on multiple continents; he served in the Low Countries, South Africa, South America, and through the whole Portuguese and Spanish Peninsular Wars. Over the Pyrenees and into France, eventually culminating in the Waterloo Campaign, ending his active campaigning career with the post-war occupation of France.

Despite a career whose laurels rank him second only to Wellington himself and Beresford (about whom the author, a descendent of the latter, has also written a book), Pack, who died aged just 48, has not been widely studied individually.

This is an interesting work, filling in a bit of a gap. Rather specialist perhaps, but broad ranging, due to its subjects long globe-trotting career. One for the buffs, admittedly. But certainly well worth reading.

Mr. Beresford reintroduces us to the Anglo-Irish Major General who helped fight Napolean and France in Spain as well as on the field at Waterloo in Belgium. Quite often the sole British General known is The Duke of Wellington. General Pack led just a colorful a life in the Peninsula Campaign, invasion of Argentina as well as the French Revolutionary Wars.

This is exactly the kind of military history that entices me to read military history. Beresford explores an interesting and relatively minor figure of the Napoleonic period, Major General Sir Denis Pack, using a lot of period primary and secondary sources, and gives insight into the broader military history of the era. This book is interesting because Pack fought everywhere - from Ireland to South America to The Peninsula to Waterloo - won decorations and acclaim, but was a junior general. So the reader gets to see the scope of war at a more tactical level. I thought Beresford has a clean and easily comprehensible style, writes frankly about gaps in the historical record, and grabs the reader and holds him-or-her throughout. Well done.

A very readable biography that certainly adds value to the team of Generals with whom Wellington surrounded himself. Pack had considerable experience in the almost continuous warfare of the late 18th and early 19th centuries and his character shines through. You find yourself wanting to be under the command of this man. Whilst Waterloo is the key battle, the author takes time to fully explain the experience of Pack’s brigade at Quatre Bras, which raises further the esteem for its performance at Waterloo two days later. The biography is well supported with maps and images.

After completing a Masters degree in history at Trinity College, Dublin Marcus de la Poer Beresford qualified as a lawyer and practised with A & L Goodbody in Dublin. Since retirement he has returned to the study of history, researching, writing and lecturing on aspects of the Napoleonic Wars. In addition to producing a number of academic articles on the subject, he recently published Marshal William Carr Beresford: ‘The ablest man I have yet seen in the army’.