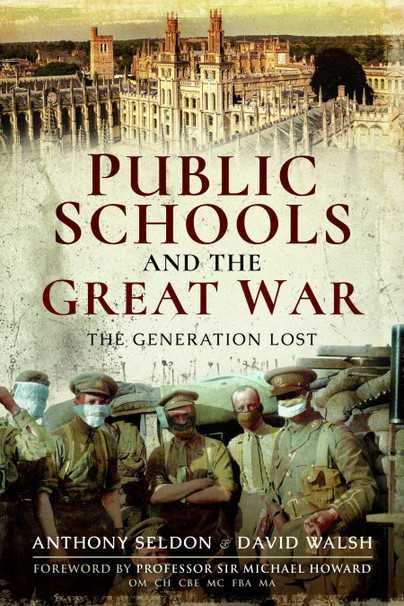 Add to Basket
Add to Wishlist
You'll be £14.99 closer to your next £10.00 credit when you purchase Public Schools and the Great War. What's this?
+£4.50 UK Delivery or free UK delivery if order is over £40
(click here for international delivery rates)

The book examines the impact which the Great War had on the Public Schools and the sacrificial contribution made to the victory which came in 1918. The war consumed about a fifth of all the public schoolboys who fought, while the survivors were scarred by the loss of so many friends. Based largely on source material from school archives and histories, it moves from the naive excitement of the summer of 1914 to the many moving stories that emerge from the carnage of the Western Front. It looks at school life in those war years, boys with their futures on hold and the prospect of death always very close, Headmasters and staff devastated by the loss of so many young lives. About one distinguished Headmaster, who died in January 1919, it was said that ”the War killed him as straightly and surely as if he had fallen at the front".

The book ranges across many topics including the selflessness and pride of Public Schools across the British Empire and in Ireland; the role of the Officers Training Corps in militarising a generation; the letters written from the Front to teachers; the pride taken by schools in the Victoria Crosses etc won by Old Boys; the statistical terms in which the Public Schools contribution can be measured; the ways in which schools commemorated the war, and still do so today. Finally the legacy of the war is examined, both the effect on the schools themselves but also the contribution made by writers and artists to the disillusionment of the inter-war years.

In this fascinating analysis of the impact that public schools had on the conduct of the Great War and vica versa the authors conclude that the values of idealism, stoicism and duty imparted to their pupils remain as relevant today as one hundred years ago. These public school educated young officers’ paid a very heavy price for the way in which they cared for the men under their command under circumstances of extreme danger and suffered a death rate almost twice the national average. This thought provoking book by authors who are eminently well qualified in their subject does much to overturn the popular “lions led by donkeys” misperception and should be mandatory reading for all students of the British officer corps through the ages.

This book rests on a remarkable archival effort. [It is] especially pioneering in its treatment of headmasters, showing how they took the lead in the mourning of communities which became used to daily tragic news from the Front.

History - The Journal of the Historical Association

A really excellent book. Very readable and both heart breaking (in terms of the individual stories told) and thought provoking. If you feel like you are having a bad day, reading a few pages of this book puts ones trivial modern worries into their true perspective and makes one feel simultaneously both very sad and yet so grateful to have missed the carnage of 100 years ago. The authors are to be commended on their in depth research and for writing such a gripping and thoughtful book. They should be very proud. Well worth the money. I would encourgae anyone to buy it.

This is a very thought-provoking book, beautifully written, and a fitting testimonial to the Lost Generation.

Seldon and Walsh offer a more detailed and distinctly more nuanced description of how these schools operated, handily knocking down a few clichés on the way.

Fascinating and impeccably researched - the sheer breadth of research involved is impressive.

I cannot help think of the young men a century ago with thoughts of university, suddenly finding themselves fighting on the Western Front or storming ashore at Gallipoli, their sacrifice highlighted in this brilliant and most poignant book.

The reader is left with a vivid impression of the impact of the war on the life of the schools and the moving stories of many individual officers.

This year's centenary of the start of the Great War has undoubtedly prompted the timing of this fascinating and disturbing account of young affluent men lost in a terrible and ultimately futile conflict... This book explores fresh ground in the story, drawing on new evidence from 200 leading public schools and other archives. In particular, it calls into question the claim that the public schools ethos caused needless suffering during the Great War.

A remarkable analysis of the public school ethos and how it manifested itself before, during and after the battles of the First World War.

Seldon and Walsh bring alive the human stories. It is not all statistics about how many served and where, but they take the opportunity to use first hand accounts and the real experiences, which make the scale of the loss all the more apparent and tragic.

This is a pioneering work and an excellent piece of research which does not venture down the paths of prejudice and cliché, but has a refreshingly open-minded approach.

The debate over the 'Blackadder Effect' on our perception of officers' conduct in the First World War is brilliantly dissected in 'Public Schools and the Great War'. This poignant and thought-provoking work covers not just those who made the final sacrifice, but also those who returned, and whose lives were shattered as a result of their physical and psychological wounds.

One of the very best of the new books on the war.

Not only an inspiring piece of social history, but a deeply felt work of piety.

This book, written by the Master of Wellington and a former master at Tonbridge, is sympathetic to the schools, though by no means uncritical. It's main achievement, however, is to set out the facts and tell the story clearly.

Using original documents held by the schools and other archives, the book reveals the emotional impact of the war on the schools.

David Walsh is former Deputy Head of Tonbridge School and has taught in Australia. He co-authored Public Schools and The Great War (Pen and Sword Military 2013) with Anthony Seldon.

He leads battlefield tours. He is married and lives at Oxted, Surrey.