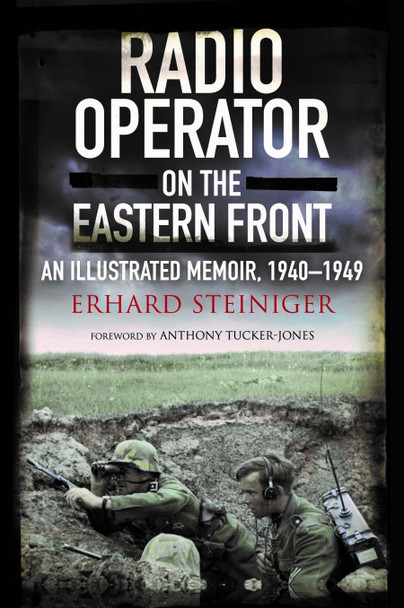 Click here for help on how to download our eBooks
Add to Basket
Add to Wishlist
You'll be £4.99 closer to your next £10.00 credit when you purchase Radio Operator on the Eastern Front. What's this?
Need a currency converter? Check XE.com for live rates

This is the true and dramatic testimony of a German grenadier during World War II.

Erhard Steiniger joined his Wehrmacht unit on 12 October 1940 as a radio operator, a role which required his constant presence with troops at the Front, right in the midst of combat. On 22 June 1941, he accompanied his division to Lithuania where he experienced the catastrophic first day of Operation Barbarossa.

He later witnessed intense clashes during the conquest of the Baltic islands and the battles leading up to Leningrad on the Volkhov and Lake Ladoga. He describes the retreat from battles in Estonia, Kurland and East Prussia and his eventual surrender and captivity in Siberia. He finally returned to Germany in October 1949, a broken man.

"This often subdued, but continuously hypnotic, memoir is rare since it offers so much information, knowledge, and insight about the enemy from the beginning of the war on the Eastern Front right up to Steiniger’s release from a prison camp in Russia and return to Germany in 1949."

"Most World War II books related to radio communications are written by professional historians, journalists or scholars, but this book is written by a German-speaking citizen of the Sudetenland region of Czechoslovakia."

A highly readable and seemingly honest account of the experiences of an ordinary soldier who states quite clearly that he did not want to be a hero or win any medals.

This is a thoroughly engaging book, one that I really enjoyed reading. This book is about the German soldier Erhard Steiniger, who has written a very descriptive book full of details and observations in what he must have found as a deeply depressing and sad situation. I think because the descriptive writing adds more to the story it makes the reader feel a more part of the book. Also with this we have a great set of photographs, these add to the story and the grimness really. I very well written book and certainly one to recommend to others.

Witting testimony of a German radio operator - a extraordinary account from a German perspective. Fascinating.

I thoroughly enjoyed the 6+ hours I spent reading this 320-page WWII history. It is primarily a biography of Erhard Steiniger. The book includes several photos of Steiniger and his comrades. It was a little different to read of the war from the Axis point of view. I like the selected cover art. I give this book a 4.4 (rounded down to a 4) out of 5.

The descriptions of the endless vistas, swamps, seasons of the year are all vividly described to make you feel part of the intense action mixed with intense nothing waiting for the next incoming shell or sound of the Soviet tanks. Very little is shared with us about his 4 years in Siberia and as Erhard shares with us that part of his life could fill another book, one we will never read. Well deserving a read as a different perspective on a wartime memoir of a soldier on the Eastern Front.

An excellent look at the war on the Eastern Front in WW2 from the German perspective. I found the story engaging and highly gripping! The story is one of human courage and perseverance. A must read for those who enjoy historical books.

The scope of the experiences of Erhard Steineger is truly huge! From the start of the war in 1940 in his hometown to the end in 1945 the whole horrible tragedies of war are honestly offered. Erhard served with a signal division that did much more than just communicate via telephone and code. They fought battles with enemy soldiers who had broken through to the rear and were attacking with desperation. This book is not political in discourse and its truly only a soldiers story. The brutality of war and the strange coincidences of battle are described almost so well that I felt I was there in the trench. Or hiding in the bunkers with the others waiting for the horror to end. This book is remarkable IMO for the reason that the honest feelings and ideas of the people of the time are given without sugar coating or attempting to rewrite history . If you want to read a real story of the hell of the Eastern Front through Barbarossa to the end in 1945 then this true story will hold your attention. Well written and easy to understand , events described in detail that has meaning to the story. A story from a common soldier who is duty bound and trying to stay alive to see his family again. Tragic but true, these stories continue to this day.

Erhard Steiniger was born on 8 April 1920 in the Sudetenland. He joined his Wehrmacht unit on 12 October 1940 as a radio operator and saw action across the Eastern Front, ending the war as an Obergefreiter (lance-corporal). During the war, he was awarded the Iron Cross II Class, Wound Badge in Black, Infantry Assault Badge and Ostmedaille. In May 1945, he fell into Russian hands and spent four-and-a-half years as a prisoner in Siberia.