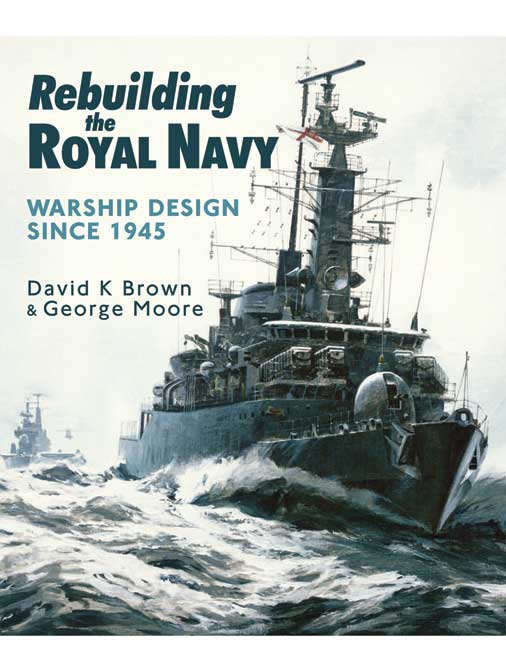 Click here for help on how to download our eBooks
Add to Basket
Add to Wishlist
You'll be £4.99 closer to your next £10.00 credit when you purchase Rebuilding the Royal Navy. What's this?
Need a currency converter? Check XE.com for live rates

This design history of post-war British warship development, based on both declassified documentation and personal experience, is the fourth and final volume in the author's masterly account of development of Royal Navy's ships from the 1850s to the Falklands War. In this volume the author covers the period in which he himself worked as a Naval Constructor, while this personal knowledge is augmented by George Moore's in-depth archival research on recently declassified material.

The RN fleet in 1945 was old and worn out, while new threats and technologies, and post-war austerity called for new solutions. How designers responded to these unprecedented challenges is the central theme of this book. It covers the ambitious plans for the conversion or replacement of the bigger ships; looks at all the new construction, from aircraft carriers, through destroyers and frigates, to submarines (including nuclear and strategic), to minesweepers and small craft. The authors pay particular attention to the innovations introduced, and analyses the impact of the Falklands War.

At the start of the twenty-first century the Royal Navy is still a powerful and potent force with new and a number of innovative classes, both surface and sub-surface, coming on stream. This book offers a fascinating insight into how the post-war fleet developed and adapted to the changing role of the Navy.

What a fantastic book by Seaforth Publishing. ...It is not only a beautiful book but also a beautiful object, which shows the Royal Navy in the second half of the twentieth century.

A good coverage of an interesting, if ultimately frustrating, period in Royal Navy warship design.

The book is illustrated by numerous line drawings and a superb collection of contemporary photos, and offers a fascinating insight into how the post-war fleet developed and adapted to its changing role.

The book is well laid out with many ship plans and detailed appendices, and is splendidly illustrated throughout. This book is strongly recommended to all interested in the post war Royal Navy

Since I qualify as having served in the Royal Navy since 1945 I was hoping that this book would cover the ships I served in. I was not disappointed; indeed it goes into great detail on all the classes I served in and all the others that remain so vivid in my mind. From my personal point of view my old ships are well covered, viz, Grafton, a type 14 Second-Rate Anti-Submarine Frigate, Chichester, Aircraft-Direction Type 62 Frigate, Lion, a Tiger Class Cruiser, & the Carrier Victorious. The final thrill was to find on page 52 a Photograph of HMS Aisne, a Battle class Radar Picket Conversion Destroyer. I say thrill because the Photograph is dated 1966 and one of those tiny black figures may be me. On page 181 the Authors show a Type 22 junior rates bunk space with the caption, "A far cry from the hammocks of the Second World War" I would add, and beyond because I slept in a hammock in Grafton and Chichester.

This is a super addition to any Maritime enthusiast's library.