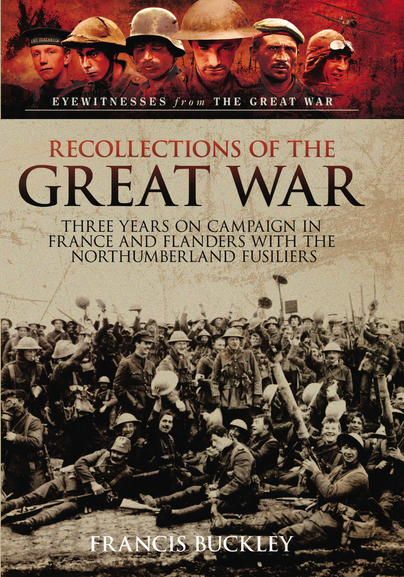 Recollections of the Great War (Hardback)

Add to Basket
Add to Wishlist
You'll be £10.19 closer to your next £10.00 credit when you purchase Recollections of the Great War. What's this?
+£4.50 UK Delivery or free UK delivery if order is over £35
(click here for international delivery rates)

This rare primary source account is the story of the hard fighting battalion of the 7th Northumberland Fusiliers, which saw action on the Somme, Passchendaele and in the Battle of Arras. This wonderfully detailed account provides a rare insight into the experiences of the common soldier on the front line during some of the bitterest conflicts of the war.

Unembellished and unwavering in his account, Francis Buckley here records not only the events of the battles he fought in, but also provides an emotional tribute to the heroism of the friends he made and lost during his time in the field. As well as his fellow troops of the 7th Northumberland Fusiliers, Buckley also remembers, with great fondness, the bravery of the officers and men of the 149th Infantry Brigade, and of the 50th Division. His recollections here provide a poignant reminder of the true human cost of war in the modern age.

Francis Buckley was a three year veteran of the Great War, having fought in conflicts at Flanders and in France. He was a military man, who faithfully served with the 7th Northumberland Fusiliers, and had endless respect and admiration for the comrades he found in battle. Buckley found himself engaged in some of the harshest encounters of the Great War, including the Battle of Arras, Passchendaele and the Battle of the Somme, yet never lost his respect for the men who served with him, nor the generals who commanded them. He was a true soldier, and, although humble on the matter, a born author also, who
shall be remembered for his unflinching narrative, shown here in this volume.