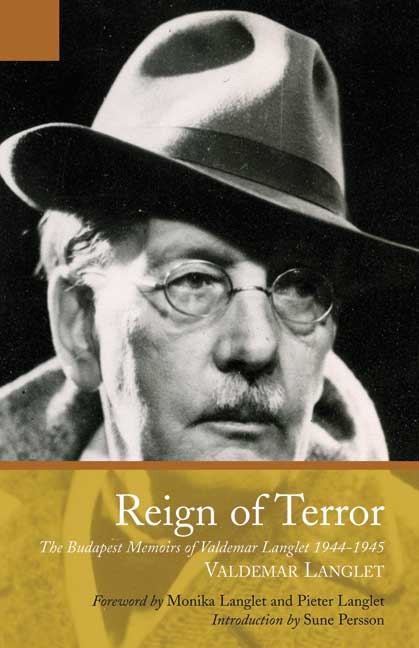 The Budapest Memoir of Valdemar Langlet

Click here for help on how to download our eBooks
Add to Basket
Add to Wishlist
You'll be £4.99 closer to your next £10.00 credit when you purchase Reign of Terror. What's this?
Need a currency converter? Check XE.com for live rates

Although not as well known as Raoul Wallenberg, Valdemar Langlet was the saviour of thousands of Jews in Budapest in the last two years of the Second World War.

Entirely without the permission or the financial support of the Swedish Red Cross, he issued socalled 'Letters of Protection', passport-like documents with official-looking stamps that frequently saved Hungarian Jews from deportation to the death camps. Then, when chaos broke out in the streets when the Germans put their Arrow Cross allies in power, and the approaching Red Army threatened to turn the city into a battleground, he risked his life to shelter Jews and other refugees in safe houses throughout Budapest.

A gifted linguist, Langlet was able in the early days to deal directly with Hungarian officials, who were often themselves eager to have the protection of the Swedish Red Cross emblem on their own houses as the war drew closer to the capital, and later with the Soviet commanders who took control after fierce fighting had destroyed much of Budapest.

This is a unique and fascinating memoir of a man who almost without any official authority or support from his own country saved thousands of lives during one of the most terrible episodes in world history.

Most everyone knows of the heroism of Raoul Wallenberg, and his role in rescuing Hungarian Jewry from the Nazis. But there were others who have not quite received the recognition they deserve. One such was Valdemar Langlet, a man of few words but adventurous spirit. A gifted linguist, university lecturer and devotee of Esperanto, his cosmopolitan outlook helped shape his approach to the protection of the vulnerable, so that he came to the assistance of people of any nationality, religion or language. By the spring of 1944, his home in Budapest was literally "packed to the rafters" with refugees. Here, we have, in one volume, Langlet's own, first hand account of events.

We learn how he built up a massive relief operation, with a whole range of flats, houses, hospitals, convents and even castles at his disposal, and developed the system of 'Schutzbriefe', or 'letters of protection', issued in their thousands to Jews at high risk of deportation to the Nazi death camps, thereby saving countless lives. This he was doing even before becoming an authorised delegate of the Swedish Red Cross!

When, in October 1944, the Germans deposed the Regent, Admiral Horthy, the Arrow Cross reign of terror began to run wildly out of control, with gangs of thugs plundering properties and hunting down Jews. Killing at random replaced deportation. Langlet and colleagues themselves experienced a number of close calls. At one point, a refuge was raided by heavily armed Arrow Cross men, drunk, and "frightening...slamming their dog-whips down on the table, shouting and swearing and creating havoc" (p 102). Shooting could be heard "in the streets, all over the place, especially after dark." Trams filled with people plunged into the dark and icy waters of the Danube when a bridge was blown (115-116). And Langlet, already threatened with death, had a narrow escape from it when the house he was visiting was bombed, but recalls his hostess coming in, "her dark hair glittering with tiny shards of glass" (119).

Inevitably, there were tensions and personality clashes. Langlet, viewed in certain quarters as something of a maverick, had his critics; the nature of the concerns of those at the top, in Stockholm, seems astonishing in retrospect. The manner in which he would ultimately out-manoeuvre them all demonstrates not only ingenuity, but enormous integrity (see pp. 177-179).

The author tells his story with genuine modesty and insight. This fine translation by Sune Persson makes available, for the first time in English, the Memoirs of this hitherto unsung hero, who characterised his own motivation as "Swedish humanitarianism and love for one's neighbour.


Reviewed by Stephanie A. Jefford

This is an invaluable memoir written by an unsung hero of the Second World War, bringing his own exploits to the attention of a modern audience as well as providing a view into the brutal end to the war in Hungary.

The incredible memoir of one of unsung heroes of World War II. The book reveals how thousands of Jews were saved from the Holocaust.

…is the fascinating first hand account of the Nazi terror in Budapest in 1944-45.

Reign of Terror is foremost an important historical source which provides knowledge about an almost forgotten hero.

VALDEMAR LANGLET was a Swedish publisher, university lecturer and Red Cross delegate based in Hungary during WWII. In 1965, he and his wife wife NINA LANGLET were recognized by Israel’s Holocaust Museum as ‘Righteous Among the Nations’ for their humanitarian work during the war.