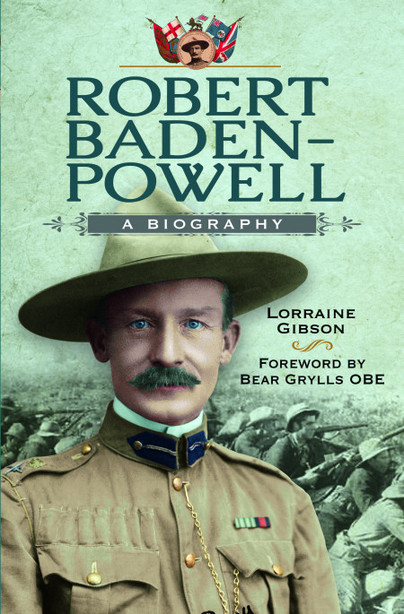 Preorder
Add to Wishlist
You'll be £20.00 closer to your next £10.00 credit when you purchase Robert Baden-Powell. What's this?
+£4.50 UK Delivery or free UK delivery if order is over £35
(click here for international delivery rates)

A conflicted character - militarist and pacifist, macho man and drag artist, elitist and socialist - he was one of the 20th century’s most influential and, latterly, controversial Englishmen, finding fame not once, but twice – and for two very different reasons.

Before donning his trademark shorts, the man known for inventing the Scouts is hailed a hero of the Second Boer War, the first military conflict covered in great detail by the media.

Reports of his unconventional methods of holding a Boer army at bay, despite being woefully outnumbered, at the South African town of Mafeking, make global headlines and when he returns home to England, hordes of adoring fans pack London’s streets, waving flags and declaring him the Hero of Mafeking.

The same ingenuity, reconnaissance skills and spectacular eccentricity that win him this military acclaim become the foundations of his second mission, that of saving Victorian boys from poverty and despair, and himself from having to grow up, by teaching them scouting.

A youth movement is born which today boasts 54 million members throughout the world.

This book examines Baden-Powell’s dual personality, or his ‘two lives’ as he called them, including his difficult childhood with a domineering and unaffectionate mother whom he loved even after she forced him into the army at 19, dashing his dreams of becoming an artist.

It looks at his military career and his love of drama and at why protesters wanted to topple his statue on Poole Quay in the pandemic summer of 2020.

It also considers a recently-discovered telegraph that adds fuel to the speculation over the nature of his relationship with a fellow-soldier that endured for 30 years - until he married a 22-year-old woman in secret when he was 55.

Baden-Powell achieved great prominence, as well as notoriety, in both his military and scouting lives, driven largely by a constant yearning to win his mother’s approval.

Lorraine Gibson is an award-winning journalist of 20 years, who cut her writing teeth on her local paper in Bournemouth. Inspired by her beautiful Dorset surroundings, she is widely published in regional and national titles and is now a freelance writer, with a passion for local history.

Living close to Brownsea Island, she became intrigued by its role in the birth of the Scouting movement while writing a feature about it. After delving deeper into the world of the Boy Scouts and their famous founder, the extraordinary and astoundingly-eccentric Robert Baden-Powell, she was hooked. When, in the summer of 2020, she covered a fight between Scouts and protesters, hell-bent on throwing Baden-Powell’s statue off Poole Quay, directly opposite Brownsea, there was no going back.

Robert Baden-Powell: A Biography is her first book and it is, like its subject, thought-provoking, contrary and full of ripping yarns. Lorraine lives in Bournemouth with her husband and two daughters.