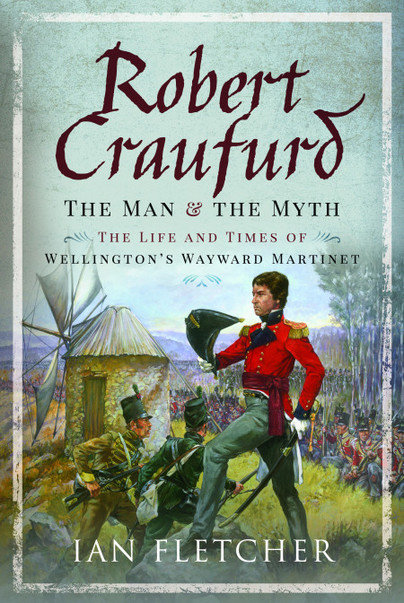 Robert Craufurd: The Man and the Myth (Hardback)

The Life and Times of Wellington's Wayward Martinet

Add to Basket
Add to Wishlist
You'll be £30.00 closer to your next £10.00 credit when you purchase Robert Craufurd: The Man and the Myth. What's this?
+£4.50 UK Delivery or free UK delivery if order is over £35
(click here for international delivery rates)

To most students of the Peninsular War the name Robert Craufurd evokes images of a battle-hardened martinet, flogging his men across Portugal and Spain, driving them hard and generally taking a tough stance against anything and everything that did not meet with his own strict disciplinarian code.

But that is only a partial picture of this most complex character, and it is the other side of Craufurd’s personality that is revealed in this, the first full-length biography to be written in the last hundred years. Craufurd’s letters to his wife are published here for the first time, and they show that he was a far more interesting and varied man in his private life than he appeared to be on campaign.

Ian Fletcher follows Craufurd’s controversial career from India, Ireland and South America to the Iberian Peninsula where he achieved immortality as one of Wellington’s finest generals.

Any student of the Peninsular War and the wider era should read this book – it brings to life one of the more complex characters in Wellington's Army and removes the myths and stereotypes that have built up around him. Unless someone discovers a treasure trove of information about Craufurd that Ian Fletcher has missed, I would argue that this is the definitive work. If you're a young officer in The Rifles, I'd pick up a copy as I sense that this will provide a useful reference for future education (as awarded by the Adjutant).

...this is a particularly good overview of a very enigmatic character, where a number of his failings have been discussed at length in a serious attempt to view Robert Craufurd from all sides alongside his creditable successes.

This is a particularly good overview of a very enigmatic character, where a number of his failings have been discussed at length in a serious attempt to view Robert Craufurd from all sides alongside his creditable successes.

The extraordinary story of a Flashman-like man whose career as a general to the Duke of Wellington has only been partially told in the past. Ian Fletcher superbly redresses the balance.

In writing this book, the author has done exactly what a good biographer should - provided a deeper understanding of his subject's personality and experience, as well as his state of mind when called upon to make certain important decisions, In doing so, the author contradicts in some cases the myths, while in other cases he confirms them. More impressive than this, though, is that Fletcher brings the reader as close as surely must be possible to knowing Robert Craufurd, the man behind the myth.

I had been waiting for this to be published and I was not disapointed. A Tour de force from Ian Fletcher, this has obviously been a long time in the making. This book charts Craufurd's eventful military life and his seldom seen home life. Some great illustrations from Christa Hook help iluminate the story. This is a large tome and well worth reading the 616 pages. This has to be essential reading for all students of the Peninsular War and one of it's most charismatic characters.
Vic Powell Portsmouth Napoleonic Society