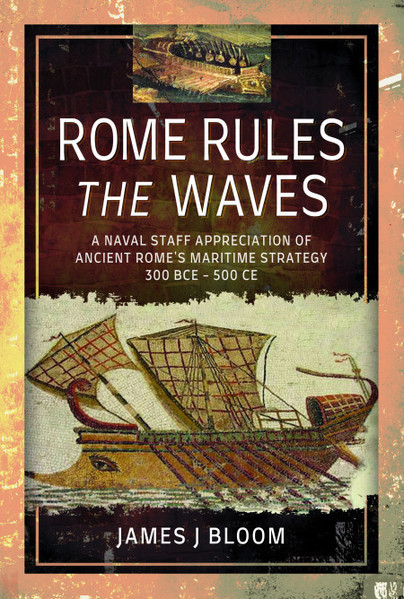 Add to Basket
Add to Wishlist
You'll be £25.00 closer to your next £10.00 credit when you purchase Rome Rules the Waves. What's this?
+£4.50 UK Delivery or free UK delivery if order is over £35
(click here for international delivery rates)

The commonly-held view of Rome's naval history is that it essentially ended with the defeat of Antony and Cleopatra's fleet at Actium in 31 BC, which left Rome with no rivals at sea just as the Republican period gave way to the Empire. There were no more big naval battles so, this view would have it, Rome's navy was scarcely needed and its role was of little significance to the strategy of the Empire. James J. Bloom rams this point of view below the waterline in his appraisal of the crucial role of both the Roman imperial navy and the steep learning curve of its predecessor, the naval forces of the Roman Republic. The author (following the line of preeminent naval theoreticians, Alfred Mahan and Sir Julian Corbett) takes the view that sea power is not merely about naval engagements. In its deeper sense, sea power is the steadfast exertion of command of the sea lanes to project trade, suppress piracy, transport troops and supplies and protect land-based military garrisons and expeditions. In effect, this book is a grand-strategical survey of Roman naval power as an instrument to support Roman imperial policy. In contrast to other works on the subject, Bloom argues that modern naval strategic theory can be usefully applied to Roman naval operations.

The geography of their empire determined that the Romans would move most of their military supplies by water. During both the Republican and Imperial periods, nearly all of the provinces had extensive coasts alongside the Mediterranean, the Black Sea or the Atlantic Ocean. These interconnected seaways gave the Romans a distinct advantage over their adversaries around the perimeter, who generally had to utilize coasts adjacent to or interdicted by Roman maritime control. As Roman land power threaded along the Black Sea and Atlantic shorelines, major river and estuarine systems became a significant component of this web of vital waterways. Amphibious reach was an essential element of Roman sea power in guarding the wet flanks of the legions and ferrying troops to threatened choke points. Appendices will include scale drawings of the various ship types discussed in the text with their characteristics displayed in tabular form, several maps illustrating the maritime factors of the empire, and a resume of maritime exploration and discoveries in Roman times.

The key strength of this book is that it makes it clear just how important sea power was for Rome.

He has laid a marker for future studies of Roman naval strategy and in that regard, Bloom has achieved his mission.

This unique history of Roman naval power is a must read for everyone who has an interest in Ancient History. The author has provided a most comprehensive review of centuries of Roman naval activity and its critical part in the expansion of Rome’s influence and power. – Most Highly Recommended.

The book is very detailed and has a lot to offer the Roman military enthusiast across all the major events in Roman history up to the end of Empire.

James Bloom explains in an academic review how Rome Rules the Waves. Suitable for a university or college library as an excellent overall study of the history of the Roman navy. Students of Roman naval history will find an interesting study of the different phases of Roman seapower from the earliest days through the Carthaginian and Eastern wars and the imperial control of all its watery areas from the Atlantic to Greek waters and trade with India.

I'm always interested in historical books about Ancient Rome and was more than happy when I was approved for this ARC.
It's a pleasant read, well written and well researched. I learned a lot and it was a great read.
Recommended.

James J Bloom has written extensively on a wide range of military subjects. He is the author of two books (The Roman-Judaean War, 66-73 AD: A MILITARY ANALYSIS (Saga Publications, Rochester, NY, 2002);The Jewish Revolts Against Rome 66 BC-AD 135: A Military Analysis (McFarland Publishing, 2010)) and has contributed to numerous edited volumes, magazines and journals. He lives in Virginia, USA.